Magistrate John Njie of the Brikama Magistrates' Court on Tuesday convicted and sentenced one Babucarr Sallah to thirty months imprisonment for the offence of criminal trespass and assault causing actual bodily harm.

According to the particulars of the offence, some time this year, the convict unlawfully entered the premises of the complainant Fatou Kambai and assaulted her.

Following a lengthy trial he was found guilty and sentenced on Count One to 18 months imprisonment and on Count Two to one year imprisonment. 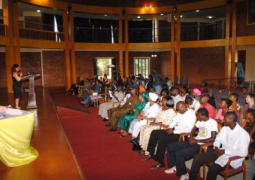