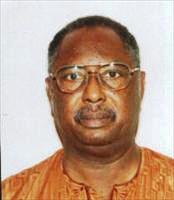 He was also a correspondent for both AFP News Agency and Reporters Without Borders for more than 30 years.

Hydara also worked as a Radio presenter in the Gambia called Radio Syd during his early years as a freelance journalist.

The Late Deyda Hydara was assassinated on 16 December 2004, on the night of The Point's 13th anniversary.

Since then he has been replaced in the paper's management team by his wife, Mrs Maria Hydara.