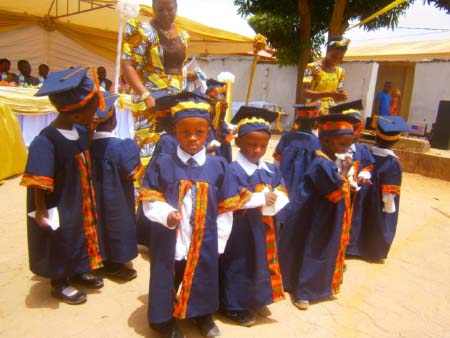 Little Acorns Daycare, Nursery and Primary School on Saturday held its 3rd prize giving and graduation ceremony for Pre-Nursery and Nursery Three pupils at the school grounds in Pipeline.

The chairman of the occasion, Charles Ebube, who is a lecturer at the University of The Gambia, said the graduation of pupils enrolled in the school shows that they (the graduates) are progressing in their quest to acquire education.

He noted that education is the driving force not only for survival but also for ensuring that people become functional and productive members of society.

The university lecturer told the graduating pupils: “Your parents are spending much to keep you in school.The only way to thank them is to study very hard at all times and make good results so that they will always be willing to support you.”

Mr Ebube also advised the pupils to obey and respect their parents at home and do the same to their teachers at school. Also, be kind to your friends and do not do anything that will hurt them.

“If you observe these norms, you will grow to become good members of society and contribute meaningfully to the development of your respective countries,” he said.

Simon Peters, founder of Little Acorns, said the school was established in 2010 with one child and it was operating in a compound.

“But today, thanks to God, the school is proud and happy to have up to Grade four and so many pupils have been enrolled,” he said.

Little Acorns is recognised and accredited to run daycare, nursery and primary school in The Gambia. The founder of the school said he has plans to make it a lower basic school in the near future.

Mr Peters said the school has given full scholarship to six children with “all the necessary benefits being given to them”.

At the end of the event, certificates were awarded to the graduating pupils and prizes to deserving ones.