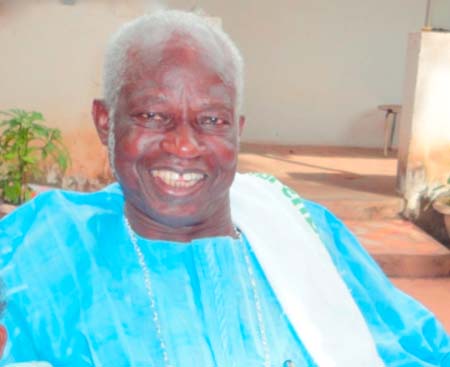 The sad news of the demise of Pa Mamadi Sowe on Saturday 30th April 2016 was received with shock. It was surprising though he was ill on and off for a while no one expected the news that went round Bakau, Pipe Line and Serekunda like wild fire. He was a well-respected person, a frank, outspoken person who did not hide his feelings and opinion about things no matter how much it hurts. He was a very genuine man.

Pa Mamadi was born in 1934, the first son of Alhaji Sulay Sowe, a well-known and respected Banjul businessman who was a groundnut trader in Fatoto in the Upper River Region. His mother was Mam Fatim Faal, a well-known women mobilizer at Hagan Street. He attended the Mohammedan Elementary School and on completion in 1952 was appointed as a daily paid at the Government Printing Department as a binding staff. Within a short time his dedication to duty and seriousness was observed and he was accepted as a permanent staff. He sat and passed the various government examination stages and rose through the ranks at the department to be a Senior Printing Officer on retirement in 1989. He was a very resourceful person and soon found partners to start the Clear Type Press which was situated at the Kanifing Industrial area. He left the Clear Type Press few years later to set up his own business printing confidential paper for the West African Examination Council.

Pa Mamadi Sowe, Mamadi to most of his friends, was one of Gambia’s finest midfield players. He played as a centre half, a position in the now old fashioned 4 1 5 formation. In this old fashion formation 1 was the midfield general who was the controller of the team.

He was the one who controls the midfield, intercept and stop all attacks from the opposition and supply the through passes to start the counter attacks of his team. This was a big responsibility and only the fittest played that role.

He was the best in the country at the time. The late Sul Samba of the Police who was one time The Captain of the National team when Mamadi played referred to him as ‘The General’.

Mamadi started playing football at the streets at Half Die and represented his school at the Inter schools competition both at Junior and senior level. He was registered by the Gambia United Football and played for that team for almost 4 years before moving to Rainbow football team which was later renamed the Black Diamonds Football Team.  Black Diamonds was one of the best teams in the Gambia in the late 1950s and early 1960s. They were the first team to wear a track suit in the Gambia. In the mid-1960s Mamadi was convinced by the late Louis Prom (Kajak) to move to the Augustinians Football Club where he played until his retirement.

Mamadi represented the Gambia in numerous matches played in Guinea Bissau, Liberia, Sierra Leone, Cape Verde and Senegal. He was a member of the 1st Gambian team to visit Sierra Leone in 1956 where he was nicknamed ‘The Rock’. He was just fantastic in that tour. The Sierra Leonean commentator referred to him as ‘Rocky Sowe’. He repeated the same form on the return leg in Banjul in 1957 when The Gambia won by 4 goals to 2. Mamadi was also in the Gambian team that first defeated Guinea Bissau in Bissau in 1959 by 3 goals to 1.

On retirement from active football in the late 1960s he enjoyed motivating the youths and helped a lot of them with ideas encouraging them in the sport. He proposed the formation of the Gambia Veterans Football Association in 1994 and was appointed its 1st President.

The Association formed a link with the Senegal Rufisk Veterans Football Association and exchanged matches were started between the two Associations.

Mamadi loved the game of football and spoke about its development in The Gambia until his final hours on Earth. When I last visited him with my friend Alhaji Omar Joof he said to me George “we have done our best and you are the ones here now. You should continue to help these people to know how to develop football in this country and tell them to allow those who know the game to run it”.

He was inducted in the Sports Hall of Fame in 1998.

He is survived by his wife Mamie Njie, 5 boys and 6 girls, cousins, Grandchildren and great grandchildren.

He was buried at the New Jeshwang Muslim Cemetery on Sunday 1st May 2016. May His Soul rest in peace!