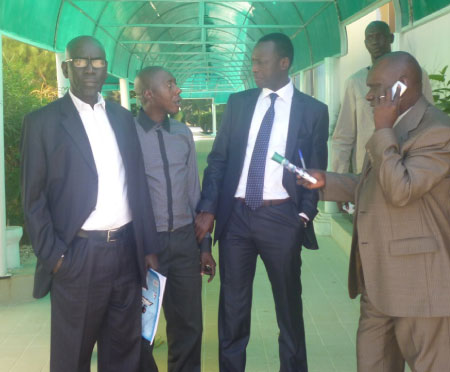 Babacar Faye, the vice president of the Senegalese Football Federation, arrived here yesterday as the head of a delegation of Senegalese football officials.

The FFS delegation are in the country to inspect football and accommodation facilities, as well as hold talks  with the  Gambia Football Association, GFA,  on modalities for possible hosting of Senegal’s home matches in Banjul.

Senegal is serving a Caf and Fifa ban following the crowd trouble in their African Nations Cup qualifier against Ivory Coast in Dakar.

On arrival in Banjul yesterday the officials were met by GFA officials, and went straight on to business visiting hotels. They were joined by the Senegalese High Commissioner to The Gambia, Babacar Diagne.

Once the Senegalese are satisfied with the state of the facilities, according to sources close to the visiting party, they would then engage the GFA on terms and conditions of hosting Senegal’s international matches in Banjul.

These would include the role of the GFA in logistical matters, such as transport and provision of essential services both at the disposal of Senegal and their visiting teams.

Though nothing concrete has come out of the visit yet, Gambians and Senegalese contacted by this reporter welcomed the idea.

Papa Kolley, a mobile merchant from Mbour, selling at the Senegambia Strip, said the only natural place for Senegal to chose as a replacement for their home match venue is Gambia, since the people are the same and the stadium would be full to capacity by spectators in Gambia alone. “I am very thrilled by this prospect, and I pray that it comes to fruition,’’ he told this reporter.

Breaking the news to fellow passengers in a taxi from Paradise Suites Hotel, this reporter received a warm approval for the prospect.

“That would be a real treat; it would be a fantastic chance to see international teams arriving one after the other to play either Gambia or Senegal. A festival of thrilling international matches; I cannot wait,’’ said one passenger.

The visiting officials continue their tour of facilities today with a visit to the Independence Stadium.