It really cost so much to be a good Christian or a true disciple of Jesus Christ.Many people love to enjoy the privilege of having the name and honour of being a Christian but live a less committed life.Fortunately or unfortunately God in his justice has provided no room for such people.

Jesus in his true teachings declares, “If anyone wants to be a follower of mine, let him renounce himself and take up his cross and follow me” (Mat. 16:24). This declaration is straight forward and bears no compromise because to follow Jesus means to pass through what he passed through.It also means to go through suffering and then take on the glory in the resurrection.

The reason why the effect of the presence of Jesus is not being felt today in our world is not because Jesus is less presented today.The reason is because there are Christians today who through their lives of witness are supposed to mediate the presence of Jesus but they simply refuse to pay the price.They are willing to shout Jesus’ name but when little challenges or persecution comes they turn their backs or run away to that which is easier to follow.The cost of being a true or good Christian is too much for them.

Those who are called to discipleship are those that Jesus wants to join him in paying an immense price for a great value which is at stake, i.e. the salvation of all people.So it is a deep and solid faith that we need in order to achieve the nature of being a true or real disciple of Jesus Christ.

It is because we are not ready to be inconvenienced in following Jesus that we do not want to see God’s own purposed realized.For some people if their clothes are dirty or they don’t have new clothes, they would not go to church to worship.Others they renounce their Christian commitment to Jesus for the sake of having a job, a husband or wife to marry.There are those that ignorance is the sole reason why they leave their church.They follow other people who convince them only through talking.

The question that Jesus raised to his disciples need to be revisited:“What then will a man gain if he wins the whole world and ruins his life or what has a man to offer in exchange for his life” (Mathew 16:16).There was one little admonition that I once received and that is whatever you are and wherever you belong if you reject it then it means there is something not worth while about it.Therefore if a Christian is committed and truly knows the value of his or her faith in Jesus Christ, then God’s purpose will be realized in him.There will be also an assurance of life eternal and salvation in heaven for the committed disciple and true Christian (Matt. 16:19).

Insane murderer to be confined at Tanka Tanka 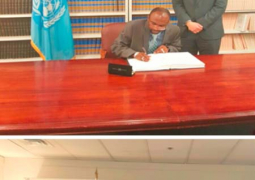