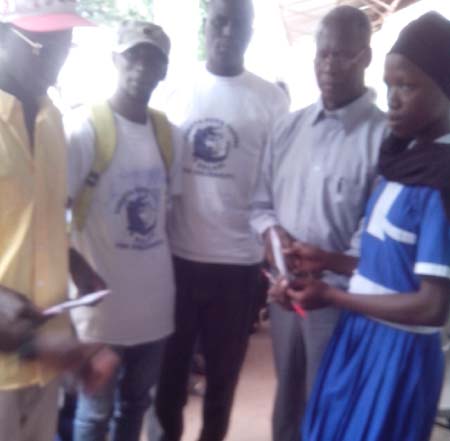 Swiss-Gam Solidarity, a charitable organization based in Switzerland, on Monday presented cash prizes to five outstanding students of Sukuta Lower Basic School ranging from grade 1 to 5 through the Sukuta Nema Youths Development Association.

Speaking at the presentation ceremony held at the school ground, Ebrima Barrow, coordinator of Swiss-Gam Solidarity Gambia branch, said the cash prize is meant to encourage the students to be serious with their education and study hard to excel in their exams.

He said since last year December the solidarity had been sponsoring students in Sukuta, Bakoteh Upper & Proper, Bundung Lower Basic schools and felt it necessary to not only sponsor students but to also motivate them to come up with excellent grade in their exams.

Coordinator Barrow appealed to students to take their education seriously to always concentrate on their books and be punctual in class.

He revealed further that the solidarity also targets other areas of need including poultry farming among others, to discourage the youth from embarking on the deadly and disastrous “back-way” journey where many lives of young Gambians are lost, adding that it has a negative impact towards the development of the country.

Speaking earlier, Kebba Conteh, Headmaster of Sukuta Lower Basic School, said he’s delighted about the cash prize presented to the students. “This support will motivate and encourage them to study hard and obtain good results,” he said.

Mr Conteh thanked the donor for their kind gesture to the school emphasizing that “Swiss-Gam has been very instrumental partner” in the school’s drive to ensure quality education delivery to the students.

“This is not the first time the school is receiving donation from the solidarity,” he said, calling on philanthropists, donors and organizations to emulate the Solidarity, since the school can’t do it alone hence needs support to actualize the school’s aim and objectives.

Lamin Ceesay, president of Sukuta Nema Youth Development Association (SNYDA), in his remarks, said the association was formed in 2008 by young dynamic youth of Sukuta to complement government’s efforts in the education, youth empowerment, poverty eradication and environmental preservation.

He thanked Swiss-Gam Solidarity for partnering with them in helping SNYDA actualize and realize their aim and objectives to contribute their quota towards national development.

Musa Jammeh, a cluster monitor, MOBSE, expressed similar sentiments urging parents and teachers to inculcate the culture of reading in the students.

Banna Ceesay, a grade two student, delivered the vote of thanks at the ceremony.