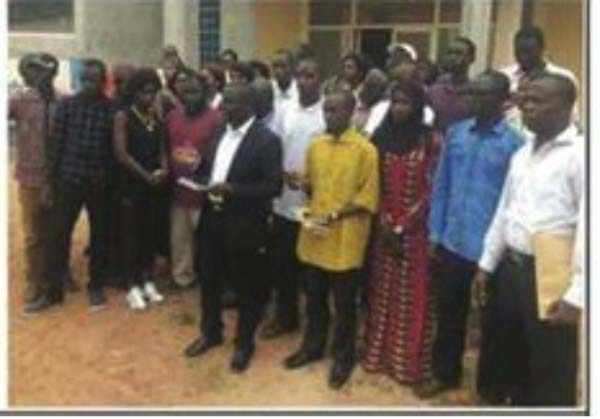 The country’s pioneer daily newspaper company, the Daily Observer, has come under fire from its own staff who are calling for the resignation of their managing director and the editor-in-chief.

Ministry of Justice has also secured an order from the high court of The Gambia, yesterday, to freeze the newspaper company as part of the assets of former President Yahya Jammeh.

The government is effectively putting the company under the management of an accounting firm, Augustus Prom.

On 14 May 2017, Observer’s offices were closed by the Gambia Revenue Authority, a consequence of tax evasion by the paper over the years.

The newspaper staff, in a petition delivered to the press yesterday evening, said it was “humiliating and disheartening for the staff of the company”.

“We are calling for the unconditional resignation of our managing director and editor-in-chief with immediate effect,” the Observer staff said in a petition read by Musa Ndow, one of the editors.

The petition was signed by over 80 per cent of the staff.  One of the staff said only those of the ‘errand boys’ of the management refused to sign.  The company has a staff of over a hundred, according to its management.

“We have lost confidence in their ability to lead us further and for us to continue to transform this paper, we need a leadership that is independent-minded and would not undermine the credibility of the staff, particularly the journalists,” Mr Ndow said as he read the petition.

Pa Modou Mbowe was appointed managing director of Daily Observer on 19 December 2016 at the height of the crisis. Momodou Saidy, who is the editor-in-chief, was also appointed the same day.

“All these happened at the height of the political crisis… their appointments came directly from the office of the then President, Yahya Jammeh.  That is where their loyalties still lie,” a senior staff of the paper said.

After the closure, the country’s press union stepped in to negotiate dialogue between Daily Observer and the Gambia Revenue Authority. After several weeks, it was stalled without any success. The Gambia Press Union blamed the paper’s management for not cooperating in bringing a solution to the tax problem.

“We are in total disapproval of his negotiation skills over the matter; for it did more harm than good and the effects of such behaviour is hanging in flames for the staff,” the staff said.

The alleged further that they did not receive pay for two consecutive months which they blame on the MD’s “lack of competence to be at the helm of affairs”.

When contacted at about 9pm yesterday, Mr Mbowe said he had not received any petition letter from his staff to be able to know what their problems are.

“We were shut down in the middle of the month. That has affected our ability to pay the staff and recover our monies from numerous debtors,” he argued when asked about non-payment of two months’ salaries as decried by staff.

Mbowe said he would be willing to sit down with the staff to discuss these issues and find solutions.

“I always listen to them. I operated an open door policy and may be that is what they want to abuse because they never enjoyed that before,” he said.

However, he said he will not step down as managing director without any tangible reasons as the staff did not appoint him at the company’s head.