Cherno Leigh, a supposed marabout, was recently convicted and sentenced to a suspended sentence of two years and to pay a fine of D1,000 in default to serve six months in prison.

Leigh was convicted by the Brikama Magistrates’ Court, presided over by Principal Magistrate Kemo Ceesay, after being found guilty of the offence of obtaining money by false pretence.

He was also ordered to pay back the sum of D10,000 to the complainant, Aja Dumbuya, within a reasonable time, and he must also co-operate with the judgment of the court at all times.

Delivering his judgment, Principal Magistrate Ceesay told the court that the convicted person, Cherno Leigh, was charged with the offence of obtaining money by false pretence, a charge he had denied.

He said the prosecution, in support of their case, had called two witnesses, while the convicted person testified on his own behalf.

“Having considered the entirety of the evidence of both the prosecution and the defence, the court is satisfied that the prosecution had proven their case beyond reasonable doubt, and found the convict guilty as charged,” Magistrate Ceesay stated. 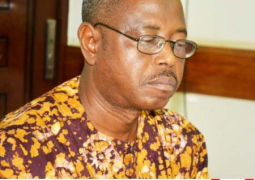