Till we meet again

Coming back home has always felt good. It gives me this inexplicable feeling of being worshipped and loved. Only this time I am not here to see my family. I have a mission. I am looking for a particular girl I met last year.

My papa’s ma guarded me jealously and told everyone who cared to listen that her grandson- her white toubab grandson had come to see her during my last visit. I still don’t feel that I am one of them; maybe it is my skin color. I have curly hair; light blue eyes just like my ma and very light skin. Emily says that I could have passed for a white. I never saw myself as black until one day in school a white boy stopped me only to call me ‘nigga’. I felt down and I had to ask my father who really was I? The first thing he did was to tell me that we are from . Startled and feeling betrayed, I replied, “Ah ain’t from , you are.”

It took several weeks for my father to really convince me that I have roots in . Then I had an urge to go see my roots after I finished college. I felt I was discovering the real me and it felt like an adventure. My grandma was in her 60’s and she used a staff to support her whenever she walks. My family is an extended one. Everybody lives together.

My cousins and aunts gave a broad smile with long chewing sticks in their mouths and occasionally spat out red spit on the floor. I winced every time they did that. The children who tugged on to their lappas held out their hands for me to give them some chewing gum. I nearly slapped their dirty hands when they tried to touch my bag. Some of them went on singing, “Toubab, Toubab”. I wanted to tell them that I was one of them; that we have the same blood running in our veins. But how could they understand when I don’t feel like one of them. My cousins Alieu and Bubacarr took me fishing and hunting, an experience like none other in . They insisted on calling me Dawda instead of David. They believed that I am a Muslim since everybody in the family is, when I don’t even know where the Qibla is. We would stay on top of trees and eat mangoes without washing them and crack coconuts so as to drink their wind-cooled milk. I felt like early man living in trees and gathering food to eat. No wonder early man was stronger and healthier. Some of my cousins’ friends called me bossman and that made me feel good. They offered to take me anywhere I asked them to. I whispered to them that I needed a bottle of beer, one that would make me wash the heat out of my head and that they should make sure that my cousins have no idea.

They took me to a local bar and we got ourselves some. I took a sip with a noisy swig and raked my fingers through my hair. I slowly took in my environment and I saw a man coming toward me. He had some African necklaces; some had baboon heads and others have lion heads with beads around them.

He thrust them in my face and said, “Good….good necklace…. power for protection.” He revealed yellowing teeth when he tried to smile. The boys warded him off with a harsh word in the Mandingo language. I was sure it was a curse because I know a good one when I hear one. It was getting dark when I saw a girl dancing to the music in the back ground. She was looking at me through the corners of her eyes. I suddenly grew interested as my blue eyes flashed in the dark. She danced and stopped in front of me. She was still dancing when she laid her hand on my shoulder. With the help of the weak light in the bar, I noticed that she had smooth chocolate skin, long dark hair and oversized eyes. When she smiled, her lips formed a heart shape and that got me really interested. I looked at the boys and they shook their heads. A signal which meant she was no good. I took some money from my wallet and handed it to her. She refused and told me matter of factly, “I don’t take free money. I do business.”

“Yeah time to go now,” I said half-heartedly as the girl waited impatiently for my answer.

“Till we meet again, be sure you would be my girl,” I whispered and forcefully gave her the wad of money as I brushed past her. I was sure it was dollars and I was feeling generous. Something about that girl stirred something in me and I was sure she had a reason for her to say ‘I don’t take free money. I do business’. Perhaps it was the way she said it with pride.

A year later, here I sit in the same bar waiting for that girl to show up. I see different girls and when I ask them if they have seen a girl of that description, they tell me no. Perhaps they don’t want to tell me. None of them looks like her and I ward them off immediately they come up to me. I have been here for two days and still haven’t seen her. She comes in my dreams every night and when I close my eyes she is the one I see. I take my last bottle of beer, hand the barman his money and head for my hotel. I tell myself, if she is meant to be mine our paths would one day cross. 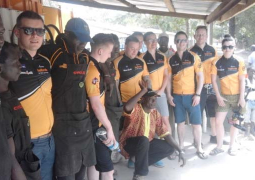