The approach taken by the Hunger Free Campaign would certainly appear to be the right one. As part of the campaign a caravan has been travelling around the country in the last week visiting people and communities on the ground and assessing their needs. The Hunger Free Campaign caravan officials include staff from Action Aid, NAYAFS, ADWAC, NAWFA, journalists, National Assembly Members and international participants. These are all the best people to carry the message of the people to those in power and also to affect change on behalf of the people they meet. It will come as no surprise to anyone that the major issue highlighted during the tour has been access to, and ownership of, land for women.

Addressing the meeting held in Kerewan in the North Bank Region, Mrs. Jainaba Nyang Njie, Action Aid Women's Right's Manager, said that Action Aid had observed that women in The Gambia are hard working but face serious constraints in having access to land and farm inputs. She expressed the need for women to have access to enough land and own it permanently.

This is an issue that we can very easily address and quickly. Simple legislation enacted properly can ensure that similar caravans in years to come will not hear about women facing these kinds of difficulties in their daily lives. If we enshrine the rights of women to land ownership and retention in law then nobody can deny the women of The Gambia these rights.

At that same meeting, Aji Konteh Sanneh, Aji Say Panneh and Aji Wuri Bah of Fass Chawo, Ker Gumbo and Waya Woto respectively lamented the numerous challenges faced by women in accessing land and in developing them. They appealed for more fertilizer, tractors and other farm implements.

On the same day a brief meeting was held in Farafenni where women farmers expressed similar sentiments. Again these are all issues that can be easily addressed with great results for all concerned.

There were many promising words spoken during the course of the caravan tour and we sincerely hope that they are followed up with definite action to ensure that the problems being faced by women quickly become a thing of the past. If anyone is in doubt as to the effects that would result from empowering and enabling women in the ways listed above he or she should only listen to the words of Jainaba Jabby, women's leader from Kuntaur, who said that women are hard working but lack the necessary support they need. She said that when given enough support they can end food crises in the country.

Regional Governors, Chiefs, women as well as other local authorities across the country are signing a petition which calls, among other things, for women to have access to land, have legal ownership over them permanently and be given more support. According to officials, this will be handed over to the Speaker of the national assembly on the 21st of this month at a ceremony to be attended by the Vice President and several other dignitaries. We pray that it will have the desired effect so that we can continue proudly on the road to the empowerment of women that we have been treading for the past few years. 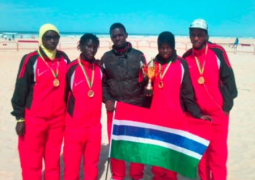