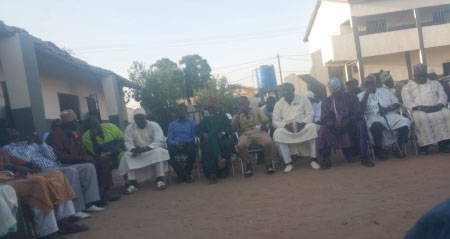 It could be recalled that The Gambia Press Union, through the Women Journalists Association of The Gambia, is implementing a project, entitled ‘Breaking the Gender Barriers’ in the Media.  The 12-month project is funded by the United Nations Scientific,

At the validation form held at the TANGO, Fatou Touray, a member of WOJAG on behalf of President of WOJAG- Sarjo Camara, acknowledged that the day marked an important milestone in the calendar of Women Journalists Association of The Gambia, as the policy seeks to put an end to sexual harassment in the newsroom.

The policy, she said, also seeks to promote gender quality in the media, adding that with the policy in place people would now be able to report issues relating to sexual harassment in the media.

The bill, she said, is about addressing the unacceptable act in the media by breaking the culture of silence through reporting the perpetrators.

She expressed appreciation to the GPU for the support, adding that in the past, series of fora were organised for reporters, editors and publishers.

Mustapha K. Darboe, deputising for the president of GPU, acknowledged that for far too long GPU is concerned in the development of Gambia media.

The policy, he said, would serve as platform to end sexual harassment in the media and went on to thank the consultants of their input and great work in drafting the policy.

Draboe indicated that the policy if implemented would greatly transform the country’s media landscape.

Also speaking, Maimuna Sidibeh, principal programme officer and coordinator at UNESCO lamented that the increasing number of sexual harassment of female journalists is a cause for concern.

“We are aware that a quite number of women newspaper journalists are sexually harassed and these harassments ranged from degrading comments to physical sexual assault. There have been stories that there are demands “for sex from young employees most especially those coming new into the profession, before they can be given assignments or even have their stories published”.

The event also saw presentations by Njundu Drammeh, an activist and co-consultants and Matt Mbye, a senior lecturer at the MDI.

Vital info for Gambian visa applicants to the UK