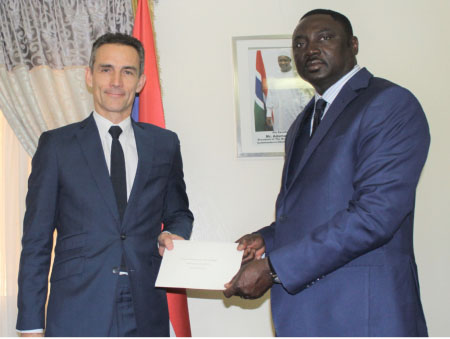 The Honourable Minister of Foreign Affairs, International Cooperation and Gambians Abroad, Dr. Mamadou Tangara, on Monday 27 January 2020 received in his office the new ambassador of France to The Gambia, His Excellency Philippe Lalliot, who presented copies of his letters of credence to the Honourable Minister before proceeding to the Presidency for the formal presentation to the President H.E. Adama Barrow. Ambassador Lalliot is accredited to The Gambia and resident in Dakar, Senegal.

In welcoming the new French ambassador, Dr. Tangara assured him of the continuous support and collaboration of the government of The Gambia at all times especially at bilateral and multilateral levels.

The French ambassador in turn assured the Honourable Minister that he will work diligently to promote and facilitate investment in The Gambia from French companies.