In what many described as unprecedented in the history of the National Assembly, Hon Sedia Jatta, opposition National Assembly member for Wuli West constituency commended Her Excellency the Vice President, Dr Ajaratou Isatou Njie-Saidy for what he described as her foresight and laudable initiatives to nation building.

Hon. Jatta, who was speaking at the National Assembly on Wednesday during a debate on the Civil Service Reform Strategy for the Gambia 2008-2011 opined that the Vice President was the only one among the lot that always thinks it absolutely necessary to bring into the assembly policies that are intended to be implemented in this country.

The policy instrument, which was tabled before the National assembly by the Vice President and Secretary of State for Women's Affairs, Dr Ajaratou Isatou Njie-Saidy, seeks to motivate, and empower public officials in general and the civil service in particular, irrespective of gender, tribe and free to affiliation.

According to the outspoken Wuli West parliamentarian, if he were to give a medal to anybody in the cabinet, Vice President Njie-Saidy would be the only one that he will give the medal to.

"This is not the first time that Her Excellency has brought wise policies in this National Assembly. This is very laudable because this is the institution that must of necessity approve every policy ready to be implemented in this country.

"But as far as I know, Her Excellency the Vice President is the only one among the lot that always thinks it absolutely necessary to bring into this assembly policies that are intended to be implemented in this country. I thank you very much Madam and if I'm to give a medal to anyone in the cabinet, you are the only one I will give the medal to," he said.

In the view of Hon. Jatta, the Civil Service of this country has been loaded unnecessarily with workers some of who don't exist at all.  He noted: "When I refer to my former department, which is the department of state for education, there existed ghost workers who were earning salaries but there was no work been delivered and I think this exists in almost every department in this country.

For him, "We must unload the civil service quantitatively and we must load it qualitatively; that is an issue of having a leaner but more competent civil service, which is being proposed by the new strategy".

"Yes I agree when people are not earning much they have a lot of problems but that should not be cause for indiscipline particularly if we accept the fact that we are addressing our selves to the task of nation building.

"That is never without sacrifice, it is never without commitment; inspite of the difficulties of small families, if people were really committed to the task of nation building, they would have known that we were emerging from a colonial situation into an independent situation; we wanted to design a new life for ourselves, we couldn't have done that without sacrifice", he elucidated.

For the Wuli West parliamentarian, the fundamental fact is that we didn't realise that we were emerging from a terrible situation of dependency into a situation where we want to be independent; we wanted to be in control of our lives.

"We wanted to design a new road for ourselves that require commitment and sacrifice on our path. When we emerged from colonialism, we didn't have money; they have derailed everything away from this republic. So it is necessary for us to suffer, sacrifice and then in the course of our suffering, we will generate enormous wealth that will help us to design a new life for ourselves", he told parliament.

That, he went on, was what was lacking, the sense of nationality and nationhood was what was absent and this is what we must establish. "Even if we implement everything in this document here, if what I'm saying does not hold, I swear there will be no fundamental change. As long as we are not committed, as long as we are not prepared to sacrifice, then there will be nothing," he pronounced emphatically. 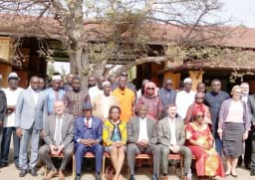