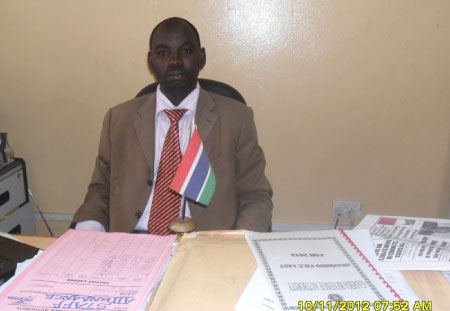 The books entitled Biography of Jaliba Kuyateh, Roles and Responsibilities of Human Resources Professionals and Plights of Office Drivers are the latest books authored by the prolific writer.

Dr Drammeh, who spoke to this reporter at his GRA office in Banjul on Friday, said the book which features Jaliba’s biography was successful after his personal intensive findings about Jaliba’s achievements in Kora music.

“Jaliba is one person who is widely known in the Kora music of our today’s generation because Jaliba has the talents, the skills, and the support from the people.”

For this reason, Dr Drammeh went on, he thought it would be fitting for him to document Jaliba’s achievements on Kora music.

Dr Drammeh said he wrote Jaliba’s biography to inspire both the youth of the present and future generations who want to become Kora music players.

The book would help people in the country to know more about Jaliba Kuyateh and also promote culture in the Gambian society, he said.

Commenting on the book ‘Roles and Responsibilities of Human Resource Professionals,’ Dr Drammeh said knowing very well that he himself works in that department at GRA he set himself to considering the importance of HR role; that is, there is no such institution or department where employees or employers can expect people to be managed accurately without a HR.

“Because the HR functions in any institution; in nutshell is to be responsible for human capital and that human capital management is where the function of HR comes in and institutions must have HR departments with personnel that would act as a liaison officer between the management and the employees,” he explained.

He added that it is HR department management counts on when it comes to issues of policymaking and decision-making. “In fact they are the custodian of policy documents in many institutions such as the staff service rules and conduct and for this reason I thought it wise for people to understand the role of HR and its importance,” Dr Drammeh said.

He also commented on the book ‘Plight of Office Drivers’, stating that the importance of drivers in any institution cannot be over-emphasised.

People have to have understanding that the workforce composes of different people with various skills.

“Each person’s contribution forms part of the success of an institution and so drivers are not an exception; drivers do wake up in the early hours of the day to pick up their bosses to get them to their workplaces on time and they even stay over time to wait for their bosses to return them home,” he added.

He said many drivers do work beyond their official working hours, thus their bosses give them family errands.

“Some of those drivers are not even rewarded for that responsibility by such bosses and for that reason people have to understand that drivers also are equally important within the institution they are working,” Dr Drammeh notes.

Sanna Nyassi is Goal.com's MLS Player of The Week