The Banjul Magistrates’ Court yesterday ordered Professor Muhammed O. Kah, Vice Chancellor of the (UTG), to produce his letter of appointment and the UTG financial report for 2010.

Prof Kah was also ordered to produce a journal or work he did before being the Vice Chancellor of the UTG.

The orders followed an application by the defence counsel Badou S.M. Conteh in the case involving Alhagie Gumbo Ali Touray, former Director of International Affairs at the university.

Touray is being tried for the offence of giving false information to a public officer, at the Banjul Magistrates’ Court.

Testifying under cross-examination, Prof Kah told the court he was appointed as president of the university by the governing council of the UTG, and it was accepted by other Commonwealth universities around the world.

Defence counsel then told him that he was not telling the court the truth, because he is not as he designated himself, the president of the UTG, because it was not indicated anywhere in the Act establishing the university.

Kah however insisted that he is the vice chancellor of the UTG, and is referred to as the president of the University of The Gambia.

Counsel added that as vice chancellor of the university serious allegations were made against him by a report of the NDEA. Professor Kah told the court that the contents of the said report “are absolutely false and untrue.”

It was put to him that he unlawfully suspended Mr Touray after the visit of the National Assembly Members select committee on education to the UTG in February 2011, during which Mr Touray honestly expressed his views.

Professor Kah in response told the court that Mr. Touray was suspended for other reasons, different from the issue of the NAM’s visit to the UTG.

Still testifying under cross-examination, Professor Kah denied terminating the services of the accused person, and said his contract had expired like that of any other staff of the UTG.

The copy of the accused person’s letter of appointment was tendered and marked as a defence exhibit.

Counsel further said as the vice chancellor of the university, Kah was seriously accused in three separate reports for mismanaging UTG funds, but he denied mismanaging funds.

When also told that most of the positions were not being advertised, and most senior positions are being occupied by his (Kah’s) relatives or friends, he denied the allegation describing it as “baseless”.

When further told that it was not only Gumbo Touray who accused him of mismanagement, and that other people have done so, including Dr. Sidibeh, who is on the UTG governing body, Kah said Dr. Sidibeh’s expressed his personal views, and that none of the UTG members wrote their names and appended their signatures.

At this juncture, counsel applied to the court for the witness to produce the UTG financial report for 2010 by the next adjournment date, which professor Kah agreed to do.

Professor Kah admitted that his wife is the Director General of MDI, and she is the signatory to the account of MDI, and denied ever receiving any allowance from MDI; but said he receives an allowance for being overseer of the Gambia College.

When asked whether he authored any books or journal before being a professor, Prof Kah replied that he did not author any books, but did journals which he promised to produce before the court at the next adjournment date.

The case was then adjourned till 20 June 2012, for hearing to continue. 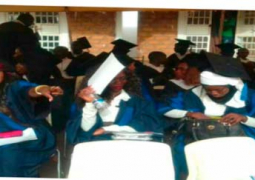