Muhammed Sisoho, the proprietor of Wuli Motel, was the latest prosecution witness to testify in the criminal money laundering case involving Ismalia Ceesay and Samba Bah.

The duo where alleged to have in their possession an implement purposely for forgery. They denied the charge.

Mr Sisoho further testified that he later called the police who arrested the accused persons and took them to Kotu Police Station. The item was later tendered in court as an exhibit by the prosecution to form part of their evidence. 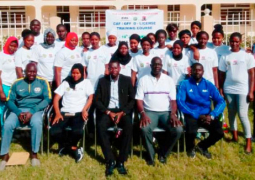