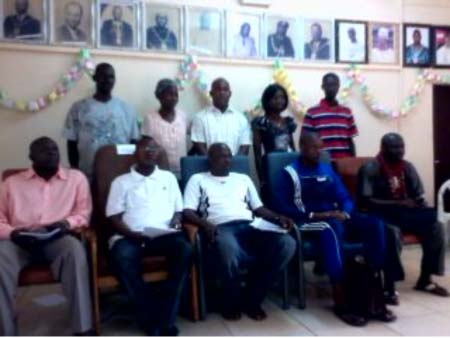 Modou Sowe was on Saturday re-elected as president of the Banjul Sports Committee to head the association for the next four years at a congress held at the Banjul City Council Hall.

The congress also saw Ousainou Darboe, Ndongo Camara and Ebou Faye all retain their positions as first and second vice presidents, and as secretary general respectively.

The congress saw the secretary general deliver his report and the second vice president deliver the financial statement due to the dormancy of the then treasurer. The congress also saw delegates adopt the Banjul Sports Committee Constitution.

The president-elect, in his speech, prayed for peace and guidance so they can do better than they did in the past four years.

Sowe, whilst thanking all and sundry for their support and confidence in him, appealed to teams to talk to their fans to avoid violence.

Abdul Aziz Titayo Mendy, overseeing the National Sports Council, challenged delegates to always elect people who are committed and have time, and who would add value to sports development in the zone.

Anywhere in the world cities are the best and Banjul should not be left behind, he stated, saying that in 2014 they want to see functional committees.

He also called for collective responsibilities from both the committee and teams.

Pa Suwareh Faye, deputy director, Ministry of Youth and Sports, called on teams to work with the committee to develop sport in the city.

A job well done to the committee, he said, adding that everything was documented and sent to the Ministry of Youth and Sports, the National Sports Council and clubs prior to the congress. “This is what is called transparency,” he said.

He said his office is aware of the various activities organised by the committee, adding that they have been organising sports activities from the grassroots to the highest level and commended them for it.

“You are blessed, you have everything - this committee,” he told delegates and urged them to call the committee to attention any time they feel it is doing something wrong.

Ebou Faye, secretary general of the committee, in his report, said the biggest achievement of the committee in the past four years was the construction of the D9.8 million artificial turf, which is “unprecedented in community football for a sporting community to construct”.

He recalled that the turf was opened in December 2010, “which has immensely transformed football in Banjul”.

The biggest challenge now is the maintenance of the turf after the recommended 8-10 years, he pointed out.

The Mini Stadium employs 5 staff who were all being paid from the funds generated by the ground but in 2013, the Lord Mayor of Banjul, Hon. Abdoulie Bah, together with the BCC, took up the responsibility of salary payments to all staff, he said.

“The envisaged future plans for the Mini Stadium is the building of ten thousand seated round pavilions,” he remarked, saying: “We have already acquired the design and cost and now the challenge is to raise the funds for the building of pavilions.”

In 2011 the committee secured a sponsorship with Sky High Group for the branding of the walls to the tune of D100,000 for 3 years, which was principally tied to the Nawetan for the finalist of the league and knockout respectively, SG Faye also said.

“The 2009, 2010, 2011, 2012 and 2013 Nawetan were all successfully completed but still marred by indiscipline and unruly behaviour from players and supporters alike from all teams,” Faye pointed out.

They have competed in the Super Nawetan competition during the period under review but still failed to win the trophy, he highlighted.

“Zonal competition was organised for the four sporting zones in Banjul; that is Banjul South, Banjul North, Banjul Central and Tobacco Road sponsored by Capital FM, which was very successful. The competition was later integrated to the Capital Cultural Carnival, which is now an annual event,” he added.

The most disappointing aspect of the period under review is the failure to win the Super Nawetan even though the Banjul team is always well prepared for the competition, he pointed out.

Mr Faye revealed that next year the committee will increase the money for the league prize for winners to D50,000, and the runners-up to D30,000. Each semifinal loser will also receive D10,000, he added.

The Knockout trophy prize for winners will also be increased to 35,000, runners-up prize to D25,000 and each semifinal loser to also collect D10,000, he disclosed.

They also intend to form a team for the third division qualifiers, he said, adding that they need technical staff and players, whilst calling on teams to send in their players for selection.

He thanked the committee for their vision for the development of sport in the city.