‘I did not influence SSHFC to fund Mariama Sillah’s programme’, Sabally tells court

Sabally was opening his defence before Justice Amadi of the Special Criminal Court in Banjul, after senior defence counsel Antouman Gaye informed the court they were ready to give evidence.

In his defence, Sabally told the court that in July 2014, he was relieved of his appointment as the Secretary General and head of the Civil service, and Minister of Presidential Affairs.

He was then redeployed to the Ministry of Higher Education Research Science and Technology (MOHERST), as minister.

He served at MOHERST for one week and was relieved of that appointment, arrested and detained, adding that he did not remember the exact date but it was around 7 July 2014.

He said he was detained at the NIA headquarters in Banjul in a cell and was there for about four months. He was then brought to court and slammed with several charges, he testified.

“You were charged with 8 counts of various offences and you pleaded not guilty and people have come and given evidence on those charges. You heard what Edward Graham and Abdoulie Cham of SSHFC said. Is it true that you influenced SSHFC to fund Mariama Sillah’s programme?” counsel asked.

“I did not influence the SSHFC to fund Mariama Sillah’s programme,” Sabally told the court.

Sabally said Mariama Sillah was introduced to him by the then Director General of GRTS, Lamin Manga, in his (Sabally’s) office where both Manga and Sillah were present.

He said Mariama Sillah introduced a programme called “Youth Career Development” designed to train school children in self-fulfillment, career guidance with a component to dissuade the “Back Way” syndrome.

He added that Mariama Sillah was seeking funding for her programme.

He told her that he (Sabally) did not have the authority or resources to fund the programme even in his capacity as SG.

He told her to approach corporate institutions, Sabally said, adding that he promised to support Mariama in that process, because he (Sabally) believed that was an important programme that could fill an important void in the course of youth development in The Gambia.

“I saw the programme, and I was excited because I am a motivational speaker myself and an author with a deep passion for youth development,” he said.

The former SG said he called the managing director of SSHFC and told him about Mariama Sillah’s youth career development programme, and asked him (Graham) if he would like to meet Mariama so that Mariama could introduce the programme to him, and Graham agreed.

“I did not give Graham instructions and I did clarify that to Mr Graham on the phone,” said Sabally.

He told Graham that he was not giving him directives to fund the programme, and further advised Graham to look at the programme with his team to see if it would fall under their corporate social responsibilities, which Graham agreed to.

He said after sometime, the head of finance at SSHFC, Abdoulie Cham, called him regarding the programme and told him their team had discussed with Mariama Sillah, and found the programme to be laudable.

He adduced that Cham informed him that they found the budget to be on the high side.

He said he told Cham that it was not necessary for him (Cham) to contact him on the programme, because he (Sabally) had told Graham they should look at the programme as a team and take their own decisions.

He said Cham further told him they were going to cut the budget, and provide funding for the programme as agreed by the team.

Sabally told the court that he vehemently disagreed with what was stated in count three, which was related to influencing SSHFC to fund Mariama Sillah’s programme. 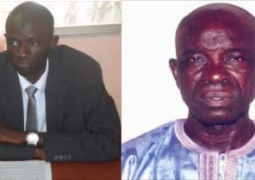