Jobarteh, who is already serving a two-year jailed term, is this time being tried for the offences of abuse of office and destroying evidence, at the Banjul Magistrates’ Court.

In her testimony, Ms Anna Dibba, the former state prosecutor at the Special Litigation Department at the Ministry of Justice, told the court that she resides in Banjul and is currently working at the Central Bank of The Gambia as a legal officer.

She said she was working for the Ministry of Justice and Attorney General’s Chambers between 2009 and 2012.

She said she knew the accused person, and at the time she was leaving the Ministry of Justice, the accused was the minister.

Designated as the first prosecution witness (PW1), Ms Dibba added that in July 2013, she received a phone called from one of the state prosecutors at the Ministry of Justice, Abubakhar, who made an enquiry about a particular file, and he called her and said he was looking for that file which she handled, and subsequently it was withdrawn from the court.

She added that the case file was that of the State versus Muhammed Kebbeh and Alhagie Ass John.

She said it was more than a year after the case was withdrawn, and her response at that time was that the file should have been in the Special Litigation office file cabinet, since that was where she worked.

Ms Dibba said all her files were normally put there, and that at that time her mind did not go to the case in question.

She further stated that, a couple of days later, she received a letter from the office of the National Intelligence Agency (NIA), requesting that she should appear before an investigation panel.

She added that the panel was to investigate the accused person and the former Solicitor General, Pa Harry Jammeh.

The invitation letter was brief, and it did not state what she was going to be asked about when she reached the NIA, she said.

She went to the investigating panel at the NIA headquarters in Banjul, where she was asked about the particular file, and her response was that the said file was at the Special Litigation files cabinet.

At that juncture, the defence counsel, Borry Touray, applied for an adjournment on the grounds that he had a lot of cases which were fixed for the day, and the application was granted.

The case was adjourned till today for continuation of the hearing.

According to the latest charge sheet, Jobarteh was accused in count one that in May 2012, at the Ministry of Justice in Banjul within the jurisdiction of the court, whilst being employed as the Attorney General and Minister of Justice, he acted in excess of his office and instructed Miss Anna Dibba, the state counsel at the Special Litigation Department to effect a withdrawal of a legal suit in the State versus Muhammed Kebbeh and Alhagie Ash John, that was before the Banjul Magistrates’ Court, and thereby committed an offence.

In count two, Lamin AMS Jobarteh was accused that sometime in May 2012, he obtained a case file in the State versus Muhammed Kebbeh and Alhagie Ash John from Anna Dibba, at the Special Litigation Department in the Ministry of Justice and willfully destroyed same with intent of preventing it from being used in further proceedings, and thereby committed an offence. 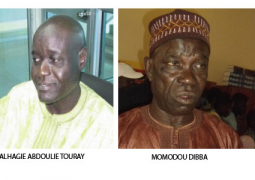