Magistrate Tabally of the Kanifing Magistrates’ Court Monday convicted and sentenced one Victor Gibba to a fine of D25, 000 in default to serve three years in prison.

Victor Gibba, who was found liable of stealing, was also ordered to pay a compensation of D230, 000 within three months failure of which he shall be arrested and granted bail of D300, 000 with two Gambian sureties who must deposit title deeds.

The facts of the case as narrated before the court stated that the convicted person said he was an employee of Guaranty Trust Bank and in October 2011, he went to the said bank to withdraw D225, 000 from the joint account of Bakary Sonko and Rohey Ceesay-Sonko, which he was managing for them.

It was until May 2012, when the convicted person sent an e-mail to Bakary Sonko who is based in the UK, confessing to taking the said amount from the said account on 18 December 2012.

When the complainant, Bakary Sonko, came to The Gambia, he reported the matter to Kairaba Police Station.

The convicted person was arrested and charged with the offence committed.

According to the charge sheet read in court, in October 2011, at Guaranty Trust Bank, Kairaba Avenue Branch, the convicted person, Victor Gibba, unlawfully withdrew an amount of D225, 000 from the joint account of Bakary Sonko and Rohey Ceesay-Sonko of Banjulinding without their consent. 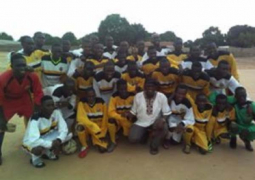