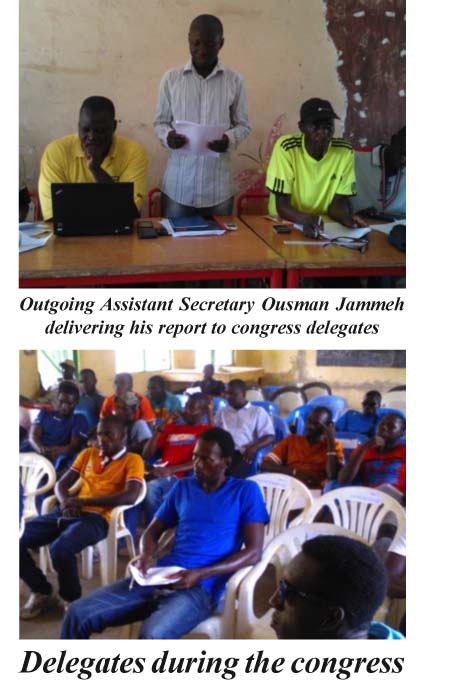 Lamin Darboe has been re-elected as the president of Gunjur Sports Committee for the next three years unopposed.

Darboe was re-elected at the Committee’s third annual general congress held at the Gunjur Daycare Centre on Sunday.

Darboe also thanked his executive members for accepting their positions to be on the committee, adding that they would put in all efforts to promote and develop sport in Gunjur.

Darboe challenged the coaching staff to redouble their efforts in order to secure good position next season and gain promotion to the second division.

Chairperson Kombo South District Sports Committee, Buba Bada Bojang, advised the players to change attitude for the better, adding that many people who have had positions in Gunjur have had to resign because of the attitude of players.

Bojang added that Gunjur is blessed with educated people, noting that many people opted not to handle positions because of the attitude of the players.

For his part, the outgoing assistant secretary, Ousman Jammeh, said congress is a constitutional mandate before the start of the new nawettan season.

Jammeh said Gunjur did not take part in Kombo South district football tournament for three years because of financial constraints.

Jammeh also revealed that Gunjur have taken part in premier games sponsored Super Nawettan and lost to Brikama 2-1 in their opening game, but hopes are high following the team’s brilliant performance against Sateyba boys. Since then, he added, the team has continued to do well in their remaining games but their hopes were dashed after losing to Serrekunda East 3-0 before their 1-1 draw with BEM and Bakau. They wrapped up their super nawettan campaign with a slender 1-0 win over Sukuta.

Jammeh further revealed that Gunjur United have participated in the West Coast Regional third division and they were topping the league in the first round but finished fourth at the end of the season after finishing second place in the 2013-2014 season.

According to Jammeh, Gunjur Sports Committee, in collaboration with Gunjur Athletics Association, organised inter-house athletics championship to raise fund for Gunjur Zonal team’s participation in the 2014 Super Nawettan and also the development of Gunjur Nyamina Football pitch, which is among the committee’s development agenda.