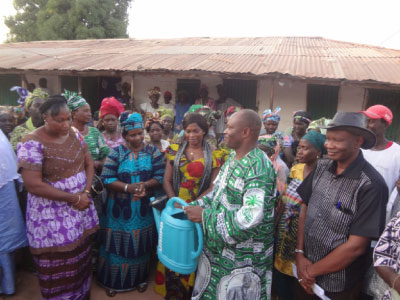 Following the recent distribution of garden tools, equipment and fertilisers worth over three million Dalasis to the horticultural women gardeners across the six agricultural regions of the country, beneficiaries have expressed satisfaction over the timely intervention of the West African Agricultural Productivity Programme (WAAPP) in boosting their moral for improved living standards.

Speaking in an interview with some of the beneficiaries at the various regions during a distribution exercise, several women expressed gratitude about the gesture, noting that such a move will go a long way towards uplifting their livelihood.

Binta Fatty of Kunkujang Jattaya in the West Coast Region said the donation came at a right time when the items are highly needed.

She lauded the management of WAAPP for their concern towards the development of Gambian farmers, as he stated, the importance of such an intervention cannot be over emphasized.

Musukebba Bojang of Sibanor village, also in the West Coast Region commended The Gambia government under the leadership of President Yahya Jammeh for the successful implementation of the project. As he puts it, it emanated from the success story of the Gambia Emergency Agricultural Productivity Project (GEAPP).

According to her, the impact of the GEAPP project towards improving the livelihood of farmers is immeasurable as far as agricultural development is concerned.

GEAPP, she added, was a household name in the country, and thus called on Gambian farmers to see WAAPP just as GEAPP.

For her part, Teneng Samateh, also a beneficiary, hailed WAAPP for ensuring that the women of Kiang Keneba had earlier benefitted from such largesse, which she said, will go a long way towards assisting not only their community, but Gambian women in particular.

She advised her fellow women gardeners to adopt best practices so as to realise bumper harvests in their agricultural gardens.

According to her, the management of WAAPP has been very committed in trying to change and improve the livelihood of farmers.

She then assured the management of WAAPP that her community will make the best use of the donated items.

Majula Ceesay of Jarra Soma also lauded the move taken by WAAPP in trying to raise the living standards and build the capacity of horticultural women gardeners, not only by providing them with tools or equipment but also capacity-building.

She urged women horticultural gardeners and all stakeholders to work hand- in-glove with WAAPP for the successful implementation of the project.

Kumba Jallow of Basse Mansajang said WAAPP’s intervention is not a surprise to the community of Basse Mansajang, noting that the then project GEAPP has yielded dividend in generating a lot of impact on the life of the people.

Noting that the project will no doubt come out with even better results, he said, WAAPP is managed by the same people who managed GEAPP.

She advised the horticultural women gardeners to continue their commitment to the project, as according to him, WAAPP is here for Gambian farmers.

She also assured WAAPP officials that the donated items would be put to good use.