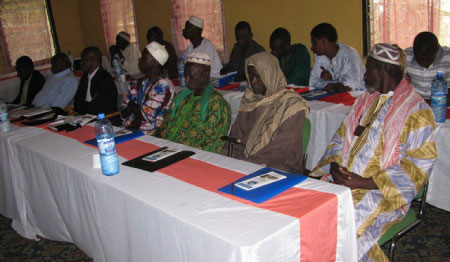 A cross section of the participants at the forum

In his official remarks, Mr. Sheriffo Bojang, deputy permanent secretary at the Ministry of Agriculture (MOA), stated that the Government of The Gambia (GOTG) has attached great importance to livestock breeding and management. And as a result, he said, the government in collaboration with its partners has decided to initiate PROGEBE and Livestock Horticulture Development Project (LHDP).

He said livestock sector has in the past been affected by institutional reforms, which effects continued to cause constraints in its operations. “I remember the change from full fledge department of DLS to unit within the Department of Agriculture (DOA) and the concomitant effect on the chain of command when with emergency livestock issues,” he stated.

While stating that GOTG is aware of these issues, he said, they have directed the re-establishment of the Department of Livestock Services with full responsibility for the subsector within the MOA.

The government institutions would rely on sound policies, local rules, norms, regulations and laws, to develop sound programmes and strategies towards achieving the overall government objectives for the livestock subsector.

“I am aware and inspired by the achievements of PROGEBE during the 4-year implementation period, which could only be sustained by a strong government institution with view to take over the tasks should the project end (December 2013),” he added.

Dr. Famara Bulli Sanyang, PROGEBE’s national project coordinator, said the forum is in line with the provisions of project implementation plan and then added that PROGEBE-Gambia is being implemented in four West African countries at the regional level, namely Guinea Conakry, Mali, Senegal and The Gambia.

According to him, the project aims to preserve the biodiversity of endemic ruminant livestock (cattle, sheep and goats), remove obstacles impeding their sustainable management and develop huge livestock potential in the sub-humid zone in West Africa.

At the national level, he said, PROGEBE –Gambia is being implemented in Central River Region, Lower River Region and West Coast Region districts of Niamina East, Nianija and Kiang West, which he added, are referred to as primary sites.

While stating that Kombo East and Sami are referred to as secondary sites, he said, its implementation started in 2012, with the aim of focusing on the success/achievement made in the primary sites.

He said the forum would avail the participants the opportunities to come up with tangible outcomes, so as to overcome some of the constraints hindering the livestock department.

Based on the calibre of participants as law-makers, policy makers, enforcer of rules and regulations, “I have no doubt that the objective of the forum will be met successfully,” he emphasised.

Mr. Ebrima Jawara, coordinator of CPCU, who commended the participants for their participation, urged for the judicious treatment of the issues surrounding the livestock, so as to come up with solutions to the problems.