The Gambia Women's Finance Association on the 17th of January held an extraordinary meeting at The Gambia Senior Secondary School Hall in . This meeting brought members from all over the country. GAWFA was established in 1987 as a not-for-profit making company limited by guarantee. In 1997, GAWFA became the first microfinance organisation in The Gambia to be licensed by the Central Bank of The Gambia as a non-bank financial institution (NBFI). Since, GAWFA's mission is to serve as a financial intermediary to enhance the entrepreneurship development of women as a means of alleviating their poverty, it also serves as a vehicle for mainstreaming women in national development.

Mrs. Oley Jagne the General Manager explained to the members in Wollof what motivated this extra ordinary meeting. "This is a way of coming together abd supporting each other so that GAWFA can move on." 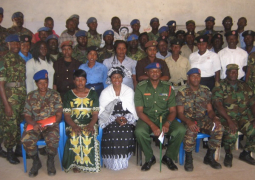