The Gambia’s economy has registered some growth in reserve money, as well as additional debt burden in the last three months since February this year.

The Monetary Policy Committee (MPC) of the Central Bank of The Gambia (CBG) has indicated that the country’s reserve money grew by 11.9 per cent at end-March 2016 from 12.4 per cent in 2015.

This was declared on Thursday at a press briefing held at the Conference Room of the CBG in Banjul.

According to the MPC report, presented by CBG’s Governor Amadou Colley, “Reserve money, the Central Banks operating target, grew by 11.9 per cent in the year to end-March 2016 from 12.4 per cent a year earlier. This was solely as a result of the 39.7 per cent increase in the NDA [net domestic assets] of the Central Bank.”

The net domestic assets (NDA) of the banking systems, on the other hand, rose by 23.0 per cent to D20.2 billion, he said.

According to the financial soundness indicators, the banking sector remains safe and sound, Governor Colley said, adding that the industry risk-weighted capital adequacy ratio averaged 36.5 per cent in March 2016, higher than the required minimum of 10.0 per cent.

Total assets increased to D29.4 billion in the year to end-March, or 4.8 per cent from a year ago attributed primarily to 13.0 per cent increase in investments, he said.

“The outstanding stock of Treasurybills and Sukuk Al Salam (SAS) combined, (66.2 per cent of the debt), decreased to D15.4 billion, or 2.2 per centfrom a year ago,” he said.

Domestic revenue, comprising tax and non-tax revenue, increased to D2.1 billion, or 5.0 percent from the first quarter of 2015.

“Total expenditure and net lending (including payment of arrears and outstanding commitments) decreased to D2.5 billion, or 3.0 per cent over the corresponding quarter of 2015,” he said.

The Central Bank governor also said that the country’s economic activity was stronger in 2015 relative to 2014 owing to the recovery of the agricultural sector, tourism and trade from the impact of drought and the spillover effects of the Ebola outbreak in the sub-region in 2014.

“Agricultural output rebounded from 7.1 per cent contraction in 2014 to a growth of 7.0 per cent in 2015. Industry value-added is estimated at 8.2 per cent, significantly higher than the 2.7 per cent in 2014 attributed to the increase in the output of construction, electricity and mining sub-sectors. “However, services value-added grew modestly by 3.3 per cent, lower than the 6.0 percent in 2014.” 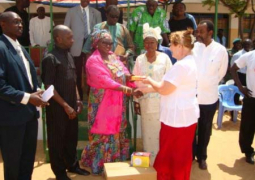