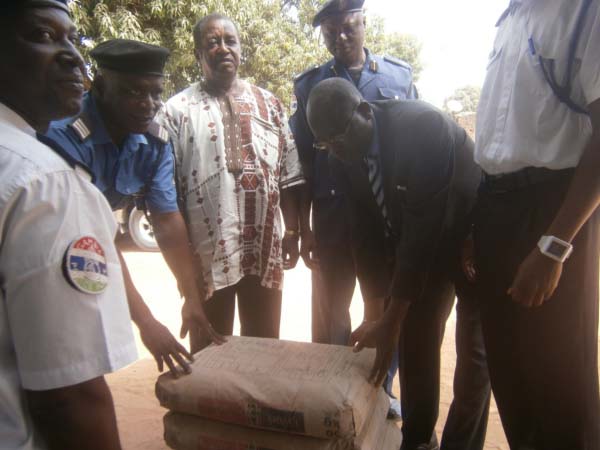 The Gambia Police Force (GPF) has received a donation of fifty bags of cement for the construction of Jiddah Police post, from the Insurance Association of The Gambia (IAG).

In his welcoming remarks at the presentation of the cement, done yesterday at Jiddah in Brikama, Police public relations officer ASP David Kujabi thanked the IAG for the donation, saying the police highly appreciated the donation towards the construction of a new police post in Brikama Jiddah, to serve the community and beyond.

“It is a good thing to support the security,” PRO Kujabi said. “We are all Gambians doing business in The Gambia and we must ensure security.”

He added that maintaining peace is the responsibility of all and sundry.

“So if we contribute towards maintaining that, we are all doing a very good job, and the Insurance Association of The Gambia’s taking the initiative to come up with a gesture of fifty bags of cement for the construction of a police post for the community of Jidda is highly commendable,” he said.

The gesture of the IAG was a demonstration that had made the police felt good and proud to have insurance companies in the country, ASP Kujabi said and highly commended the IAG for “the kind gesture”.

Also speaking on the occasion, S.O. Sarr Njie praised the people of Jiddah for providing the space for the construction of a new police post in their community.

The provision of the land by the people of Jiddah paved the way for the police to construct a police post, he added.

According to S.O. Njie, “the Jiddah youths and the community elders are very supportive” and have been working hand in glove with him to ensure they realised the police post in the area.

He also appealed to the community to continue the good work in national development as the police alone could not meet the security demand in the area.

There is need for collective effort to ensure the peace and security of the people in their respective areas,” he said, whilst thanking the IAG for the noble support.

S.O. Njie also called on the community of Jiddah to support the construction of the police post, as “it belongs to them but not the Gambia Police Force.”

For his part, Mr Henry Jawo, secretary general of the Insurance Association of The Gambia, said the donation was part of the relationship that has been existing over the years between the IAG and the GPF.

“The IAG is a partner to the Gambia Police Force,” he said, adding that insurance companies are in the country to provide insurance cover to protect properties, which is related to the service of the police.

He also highlighted the important role of insurance companies in the country.

He expressed delight to be associated with the Gambia Police Force, saying the donated items would be of good use in the construction of the police post.

In receiving the items on behalf of the GPF, Deputy Commissioner Upper West Coast Region, Molamin Sankareh commended the IAG for the donation, “which is worthwhile in the development of our policing activities.”

The intervention would also “contribute immensely” to the development of police activity in Jiddah, he said.

He thanked the IAG for the support, and commended the community of Jiddah for allocating a land for the construction of the Police Post.

He then seized the opportunity on behalf of the Inspector General Police to thank the IAG for the gesture, saying the donation would be put into good use.

Speakers on the occasion included Alkalo Dembo Dibba and Babouccar Cham, who spoke on behalf of the community and praised S.O. Njie for the initiative and for his stance to ensure the availability of a police post in Jiddah.

They assured the GPF that they would continue to support S.O. Njie to ensure the construction of the police post is realised. 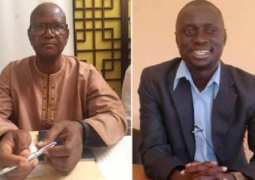