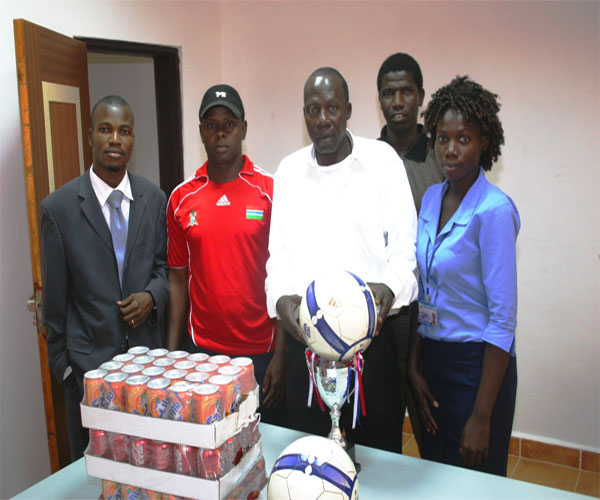 The donated items are meant for the ongoing Football Tournament at the Ebo Town Football Field, better known as Park Joola.

Speaking at the presentation, held at the boardroom of Football Digest, Ebrima Manneh, coordinator of the News paper, said that they are very pleased to be associated  with the tournament.

He thanked the committee members for identifying Football Digest, out of so many Newspapers in the country, to be their sponsor.

"I hope this will be the beginning of a good and long lasting relationship," he said.

Shola Akande, Football Digest graphic designer, applauded the sports committee for the laudable initiative and went to say" we are very happy to be part of Football development in your area".

"This is not the first time we sponsored football development program as last year we were among the sponsors of the two-week training course organised by The Gambia Football Coaches Association as well as Jarra West Senior Nawettan championship," Mr. Wifred revealed.

Receiving the items, Zone King, the head of the committee, said that  they are very pleased with the donation which will go a long way in contributing in the development of Football in the community of Ebo Town and New Jeshwang.

He added that this tournament has in the past produced talented players specially some of The Gambia National U-17 and U-20 teams.

"I have been organising such a tournament for the past 20 years and I know the impact it has on the lives of young players," Mr. King concluded.

The presentation was attended by Namory Trawally, Editor in-chief of the Paper and Mary Loppy, the accountant.

Rejoice The Lord is near