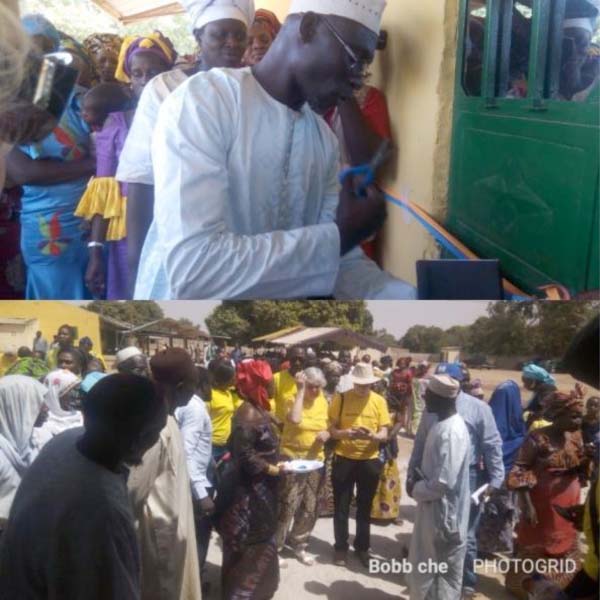 The construction of the maternity ward was initiated by the community of Fass and its surrounding villages to support access to health facilities especially for women within the area, with financial support from HELPING Charity, A UK-based charity.

Muhammed Lamin Jaiteh, Permanent Secretary at the Ministry of Health and Social Welfare in his remarks commended HELPING Charity and the beneficiary communities for complementing government efforts in taking the health sector to the desired level.

“Lots of things are in the pipeline to strengthen community health facilities in the country,” he said.

Rose Mary, a HELPING Charity UK committee member said they spent over seven hundred thousand dalasis towards helping the VDC to complete the building as well as the purchase of other facilities within the ward.

According to her, they have been supporting Gambian communities for over 20 years and sponsoring over 400 students, saying the new ward will provide safer childbirth.

Baboucarr Nyang, HELPING Charity deputy board chairperson said they have been supporting Gambia’s health care system with numerous materials and structures to strengthen the capacity of health officials and facilities to support safer motherhood.

According to tom, although maternal mortality has been halved between the periods 2001 to 2013, the number of preventable maternal death in women still remains far above SDG global target of fewer than 70 maternal deaths per 100,000 live births, saying maternal mortality accounts for 36% of all deaths among women in reproductive age in the country.

“We therefore hope that the maternity ward will go a long way in reliving the high demand for the Essau district hospital which was the most concentrated clinic in the area as a delivery center”, he said.

Awa Bojang, officer in charge of the clinic described the opening of the maternity ward as a dream come true and thanked HELPING Charity for helping improve the living condition of Gambians.

Alkalo of Fass Njaga Choi, Wally Joof said they needed the maternity ward, looking at the number of communities the clinic is serving. He appealed to the government to upgrade the clinic to a health center and provide an ambulance that will be permanently stationed at the clinic, more nurses, laboratory services, a watchman, a laundry room, cleaners, among other valuable materials.

Village Development Committee (VDC) chairperson Fatou Sonko commended HELPING Charity for their support to various sectors over the years. She also hailed her committee members for their steadfastness, commitment and hard work as well as communities who contributed to the construction of the ward.