The sub-regional bloc ECOWAS is not sending election observers to The Gambia for the country’s March 29th National Assembly election.

It would be recalled that the ECOWAS Commission did not also dispatch an ECOWAS observer mission to the Presidential Election held on 24 November 2011.

ECOWAS argued ahead of last year’s presidential election that the preparations and political environment for the said election were adjudged by the Commission not to be conducive for the conduct of free, fair and transparent polls.

Similarly, it would also be recalled that the Commonwealth expert team to the presidential election in The Gambia last year, in their preliminary statement highlighted, among others, that despite peaceful and technically sound elections, democratic reforms are needed in The Gambia.

Independent Electoral Commission sources yesterday, however, confirmed to this paper that the Commonwealth, AU and OIC have confirmed with the commission that they would send observer missions to the country, come Election Day.

The sources further revealed that an Ivory Coast-based International Group for Democracy and Election Systems has also expressed their interest in observing the election.

“This time around, we are expecting over 30 observers from the AU which is even more than the number they sent during the November 24th 2011 presidential election,” the IEC source declared.

The March 29th National Assembly Elections is being contested only by two political parties, namely the ruling APRC, the NRP, as well as several independent candidates.

Six opposition parties are not participating in the election, claiming that the playing field is not level.

As usual, foreign embassies in the country including the , , the British High Commission and are also observing the polls. 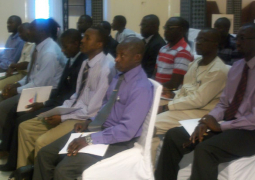