Abdoulie Bojang, head coach of the GFA division one league giants Steve Biko, confessed he was a little bit disappointed in watching his team defeated by town rivals Bakau United, which he largely attributed to lack of patience in the scoring department of the squad.

Steve Biko, also known as Bakau giant killers, succumbed to their first loss in the campaign in an encounter which saw them squander a series of superb-scoring opportunities owing to anxiety among the striking force.

Speaking to journalists after Biko’s defeat to town rivals at the weekend, coach Bojang said: “I am a little bit disappointed because we played very well but we did not take up our chances.

“We had a lot of chances that we could have scored to equalize and win the game but we lacked patience in front of the goal.”

Asked about the possibility of Biko recovering from their shocking derby defeat to neighbours at the Serekunda East Mini-stadium, Lie, who commended his team for putting in a lot of efforts even though they could not score, said that with hard work, the team will certainly get their winning mentality back on track as the league progresses.

He also called on his strikers to exercise some patience at the scoring area, saying: “It is important that you have patience in all you do.”

Bojang also refused to be drawn into the question of whether his team’s defeat to their rivals could affect them in their subsequent league matches. “Every game is important to me; whether a derby or any other game,” he said.

“We have to work hard in training because it will not be an easy championship this year considering the huge financial involvement.

“Today’s game is better than the last two games in performances but the only problem is scoring and we hope to work hard on that.”

Lie rates the performance of Biko so far in the campaign as promising compared to last season when they could not manage to secure a win throughout the first season.

He said: “This time Biko is a better team because we played 11 games without a win last season, compared to this time when we even won our opening game, which goes to show that Biko is a complete different team this time.

His opponents at Bakau United team the like of Kebba Touray said having the maximum points against a tough team like Biko “is a great result”.

Josepha, as he is affectionately called, lashed praises on his team for what he called their fantastic collective display in the build-up to the decisive goal thanks to Amadou Baldeh’s solo close range tab in few minutes to break. 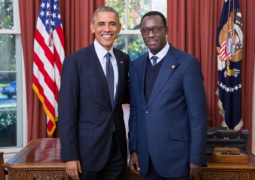