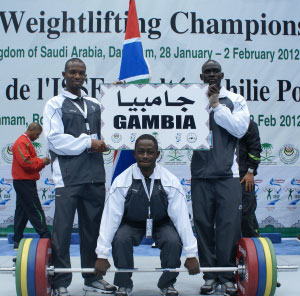 Two Weightlifters from the Gambia Weightlifting Federation, Seedy Jobe and Gibril Camara, who left the country for the Saudi Arabian capital of Riyad, will kick off the weightlifting tournament today in Dammam, Saudi Arabia.

The two athletes accompanied by Musa Koteh, president of the federation, will compete in the 56kg and 77kg events today at 5pm, reports reaching Pointsports desk from Musa Koteh in Saudi Arabia can confirm.

He told this reporter in a telephone interview that his athletes have since their arrival intensified their readiness for the big show with the determination of returning to Banjul together with his two men with pride.

“We started our first training session at 9am on the 27th January at ALETTIFAG SPORT CLUB in the same city,” Koteh said.

According to Koteh, one of his aims is to establish international connections for his athletes in a bid to easily pave the way for them to actively participate in future weightlifting championships at the international stage.

“We are really trying to meet with very good friends from developed countries in weightlifting, like Turkey and other countries,” he said, adding that the Turkish president loves The Gambia, which is why his association has committed itself to building relationship with them for the betterment of the association.

Pointsport was able to gather from reliable sources that only The Gambia and Mauritania from West Africa have managed to travel to Saudi for the championship, with Ghana, Nigeria, Guinea and many other invited nations from this end failing to travel due to visa problems.

Our hearts go to Jarra 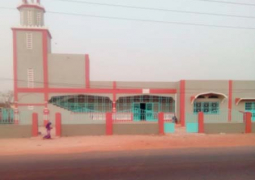