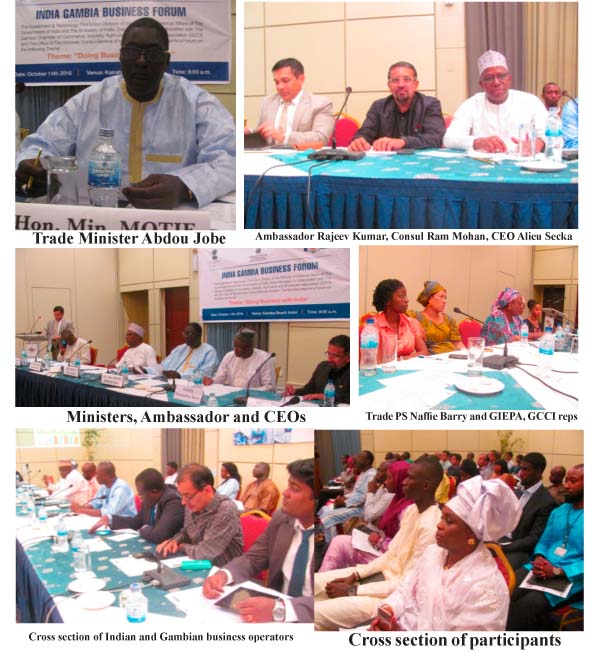 The Gambia Chamber of Commerce and Industry, Agriculture and Employer’s Association (GCCI) has continued to enhance business ties and opportunities between The Gambia and India, through an India-Gambia Business Forum that delved on the theme: Doing Business with India.

The business forum, held at the Kairaba Beach Hotel on Friday 14 October, was organised by the GCCI in collaboration with  India trade ministry, Embassy of India in Dakar and the Office of the Honorary Consul  General of India in The Gambia.

The potentially-packed business forum, which aimed at creating major business linkage and access to business opportunities, discussed trade, industrial development in The Gambia, the growing business sector and trade opportunities in India, information on the lines of credit for government and private sector, capacity building and vocational training with GCCI and GTTI, tourist and business visa information and regulations for Gambians, as well as the way forward to realising set targets.

India, a South-Asian country of about 1.3 billion people, has transformed from a poor and low-income nation in 1950 to becoming today one of the leading  nations in the world with vast industries manufacturing and exporting textiles and clothes, pharmaceuticals, jewelleries, stationery, chemicals, electronics and other engineering products.

Giving a brief background of India and its growth and development over the years, India Ambassador designate to The Gambia Rajeev Kumar said India gives priority to education, making it a key factor to growth, as well as how the country has made ease of doing business in India an attractive incentive for investors, with roads, railways, ports and other infrastructural development put in place for the country to continue to grow exponentially.

“In India electricity is ensured through a determined policy dubbed Power-for-All (PFA),” the Ambassador said.

Mr Kumar applauded the good and fruitful relations that have been existing between the two countries over the years.

He said that presently India is a host to about 17% of Gambian exports to South Asia.

Ambassador Kumar commended the Gambia government for creating an environment conducive for business to operate in The Gambia, which permitted the increasing number of Indian-owned businesses in the country.

With huge potential for business establishment in various sectors such as tourism, agriculture, manufacturing and skills development, The Gambia offers immense investment opportunities for investors to tap from.

The India-Gambia Business Forum, “with the objective of increasing business relationship across various sectors is a very laudable initiative towards bringing business together from the two countries as part of our continued efforts to widen and deepen our trade investment ties”, Trade Minister Abdou Jobe, who delivered the keynote address at the occasion, said.

He encouraged both Gambia and India investors to take advantage of the business opportunities existing in both nations.

He commended the India business operators in the country, saying their investment in The Gambia has contributed a lot to the economic growth in the country, as well as created employment for many Gambians.

“The Gambia Government is very open to facilitating and strengthening our existing bilateral relationship,” he said.

Minister Jobe encouraged investors to take advantage of the various schemes of support existing in The Gambia and India, saying: “Significant amount of monies have been put aside by the India government to support the health sector, which investors can benefit from.

“The India Government has also waived visa fees for countries, including The Gambia,” he said. “We are also benefiting a lot from India under the duty free tariff schemes. People should also know about the incentives in place by the Gambia Government for business to benefit from.”

Minister Jobe said his ministry is doing all it could to let investors and the general business community be aware of the incentives, and many policies and schemes by the Gambia government and GIEPA to encourage investment and support the business community invest and create jobs in the country.

Health Minister Omar Sey also delivered a statement on the occasion, emphasising how both nations’ investors could utilise opportunities in the health sector for investment.

In his remarks on the occasion, GCCI CEO Alieu Secka said for the GCCI and the Office of the Honorary Indian Consul to the Gambia, and by extension the Embassy in Dakar, their partnership had been based on several successful engagements for the development and advancement of the two private sectors.

“Today we have an increasing Indian Community doing business in the cashew, energy, construction and electronic retail sectors. Similarly, more Gambian exports are being sent to India amounting to some $36.2m whilst we imported $89.7m in 2014,” he said.

We have also jointly supported small enterprises in The Gambia in the Information Technology industry to participate in expos and fairs in India, supported by the Government of India. Likewise, the private sector has joined several government missions to India, including the last India Africa summit.”

Mr Secka re-affirmed the GCCI’s support to improving doing business with India, particularly through key projects such as partnering to host the first-ever Agro-processing Incubation Center in Sukuta, purpose-built.

Some indigenous Gambian businesses that have benefited from the India-Gambia business ties had the opportunity of sharing their experiences at the forum.

Suggestions such as establishing a Gambian-India Business Council were made by CEOs and business representatives, including Abdoulie Baks Touray of Sahel Invest, at the forum.

In her closing remarks, Trade Ministry permanent secretary Naffie Barry emphasised the importance of creating the Gambia-India Business Council to ensure the beginning of an enhanced trade growth and development trajectory for both Gambia and India. 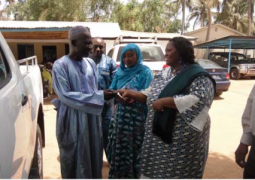