Former Hawks inspirational midfielder Dawda Bah, who failed in several attempts to hold down a regular first-team place with the informed senior national team, has vowed to regain his place in Scorpions' eleven.

Bah, who has already established himself as a household name since moving to HJK Helsinki, Finland, from local side Hawks, is widely rated as one of the most skilful players in the country.

But he has since struggled to break his way into the Scorpions eleven facing stiff competition from midfield compatriot Mustapha Jarju and other teammates.

His hope of ending lack of enough playing opportunities never came through and was again a second-half substitute after been introduced to replace Momodou Ceesay in the 15th minute from time as he helped Gambia got off to a convincing start to the Africa Nations Cup qualifiers with an impressive 3-1 win over hapless Namibia on Saturday.

Bah, whose outstanding contribution with his Finnish side HJK Helsinki was enough to convince the Sports Journalists Association of The Gambia who nominated him as one of the three candidates short-listed in the race to claim the most outstanding foreign based player of the year 2009, refused to blame Scorpions' team coach Paul Put for his lack of playing action.

"I cannot point fingers at the coach for not including me in the first team because I feel time has not come for me to start but hopefully I will regain my place in the team," Bah told Pointsport in an interview shortly after Scorpions match.

Bah's HJK, narrowly missed out in the Europa and Champions league qualifiers after losing in the  play-off stages last month. 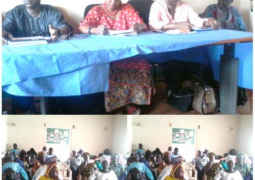