The Gambia Supreme Islamic Council (GSIC) and six Islamic scholars in the country yesterday benefited from a donation of 10 brand new motorbikes from a Saudi philanthropist.

The motorbikes are meant to ease the mobility of the scholars and promote the propagation of Islam in the country.

They were distributed to the beneficiaries yesterday at the GSIC head office in Kanifing.

Saudi philanthropist Sheikh Ibrahim Al-Muhaimi, who said his primary objective for visiting the is purposely for the propagation of Islam, donated the 10 motorbikes to boost the spread of Islam in The Gambia.

"I deserve no praise for this, because everything here is from the people of Saudia, who out of generosity decided to support their fellow Muslims in the for the easy and effective way of spreading Islam," he said.

According to Sheikh Ibrahim Al-Muhaimi, each motorbike cost D21,500 amounting to a total of D215,000.

He added that this marked his third visit to The Gambia, and that each time he came, he was always happy to deliver some gifts.

"Like I said before, my purpose for coming is only for the Daawah (Islamic propagation), and anything that falls along is just a luck. But be rest assured that any collection I am able to do will reach you in full," he assured Gambians.

GSIC auditor and former Gambain ambassador to , Alhaji Baba Abubacarr Drammeh, thanked the donors for choosing The Gambia, adding that the gesture was timely and welcomed.

The is a country with 95 percent Muslims, and key in the propagation and spread of Islam in the sub-region and the entire world at large.

He also said The Gambia is known for its friendship with other Muslim countries, especially the .

Drammeh assured the Saudi sheikh that he should feel at home and welcomed at all times.

The is blessed with a President who loves Islam, and all those who work towards the development of Islam, he added.

The 1st Vice President of the GSIC, Imam Sheriff Badjan, expressed gratitude to the donor, and assured him that the motorbikes will be put to proper use. He further assured him of their collaboration in all his work towards the development and spread of Islam in the and the world at large. 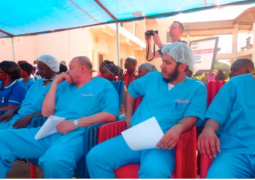