The British High Commission on Tuesday presented cheques amounting to ten thousand dollars to over forty projects in the country.

The presentation was marked by a signing ceremony at the British High Commission in Fajara.

Mrs. Haddijatou Njie, Country Director of Voluntary Services Organization (VSO) in The Gambia received the cheques amounting to 10,000 Dollars , about D370,000 from His Excellency Mr. Philip Sinkinson,  British High Commissioner to The Gambia.

Speaking on the occasion, High Commissioner Sinkinson said that the gesture was part of their world-wide exercise funded by the British Government which he noted was an annual process.

Mr Sinkinson revealed that the donation is for the financing of more than 40 projects in the areas of health, education and agriculture, ranging from completion of primary health care, renovation of wells, construction and renovation of classrooms in the rural areas, and the establishment of small poultry farms, to procurement of fishing equipment.

For her part, the country Director of VSO in The Gambia, Mrs. Haddijatou Njie, spoke with delight on the numerous benefits  the  project has gained adding that  the High Commission has worked, and continues to work closely with the volunteers to complement its project goals in The Gambia.

According to Mrs Njie, VSO has operated in The Gambia since 1960, and has a total of 49 volunteers currently working between Kombo and Basse. 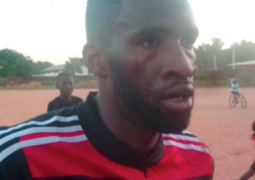