Abodou Touray was on Monday arraigned before Her Worship Magistrate Sagarr Jahateh for being armed in public contrary to section 79 of criminal cap 10 vol. laws of The Gambia.

When the charge sheet was read to him in a language he claimed to understand he pleaded guilty.

The particulars of offence stated that the accused Abdou on or about the 16th day of January 2009 at Serekunda in the KMC of Republic of The Gambia was possession of cutlass without authority.

The prosecuting officer Inspector Touray applied for adjournment in order to enable him to accertain from the police file as to whether the accused is a first time offender.

The presiding Magistrate Jehateh granted the application and subsequently adjourned the case to . 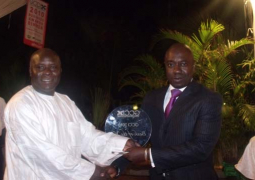