Six men were yesterday arraigned for allegedly giving false information to a public officer that some people had sacrificed a black bull as charity in order to enable Sanna Sabally to overthrow the Government of The Gambia.

Nambel Jawo, Momodou Bah, Amadou Kah, Ansu Jarju, Sulayman Jallow, all Gambians, and Omar Jallow a Senegalese national, were arraigned for allegedly falsely informing a detective officer, that one Seedy Dem and others some time between the months of November and December 2008, killed a black bull as charity on behalf Sanna B. Sabally in order for him to overthrow the Government of The Gambia.

However both denied the charges.

The case is being presided over by Magistrate Pa Harry Jammeh of the Brikama Magistrates' Court.

Meanwhile those Gambians were granted bail in the sum of D10, 000 each while Omar Jallow, Senegalese, must provide two Gambians as surety. The case was adjourned to . 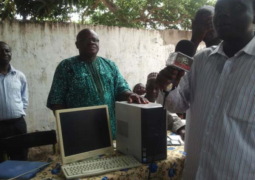