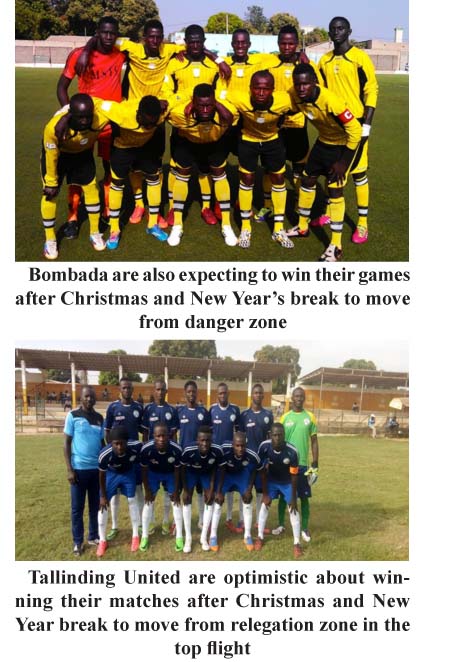 Bombada and Tallinding United are still convinced of winning their matches after Christmas and New Year’s break to move away from the relegation zone in the 2016-2017 Gambia Football Federation domestic division one league when league matches resume on 7 January 2017.

The Brikama-based outfit and Tallinding-based outfit are occupying second place from bottom and bottom in the country’s top flight respectively prior to the Christmas and New Year’s break.

Bombada are currently rooted bottom place in the top flight with zero point after losing their five opening league fixtures before Christmas and New Year’s break.

They will use the break to stretch their muscles up to increase their chances of winning their games to move away from the relegation zone and secure good position and also avoid relegation to the second division and stay in the top flight for another season.

The Tallinding-based outfit, on the other hand, will also use Christmas and New Year’s break to strengthen their weakness and to win their matches when actions resume in the top flight on 7 January 2017.

They are working hard to move away from the danger zone as well as to snatch good position and avoid relegation to the second division.

Their aim is to stay topflight for another season.