Thirteen pupils from in Kombo North District of West Coast Region recently received a donation of learning materials from a charitable organisation in the .

The donation from Harmony Gambia Organization included the payment of school fees for the pupils, stationery, clothes, and toys.

In receiving the items from Harmony representatives in The Gambia, Lamin B. Sanyang, headmaster of , applauded the organisation for settling the bills of the pupils, saying "most of them are from poor backgrounds".

The gesture, Sanyang says, makes a substantial contribution in alleviating some of the major problems faced by parents in settling the school fees of their children.

He urged parents of the sponsored pupils to ensure their kids study hard. "This will reinvigorate the charitable organisation to sponsor many more Gambians to attain relevant and quality education," he said.

The alkalo of Makumbaya village also hailed the donors and their counterparts in The Gambia for their intervention in footing the school bills of 13 pupils within his community.

Alkalo Kebba Kujabi said most of the beneficiaries "are from financially weak families whose daily survival is a burden let alone footing school bills".

He advised the parents to make best use of the sponsorship by creating the necessary environment for their children to learn, without which, he said, their children "may lose" the golden opportunity. He assured the donors of his community's full support at all times.

In delivering the items to the beneficiaries, Talibo Saidy, representative of Harmony Gambia Organization, applauded the people of Makumbaya for the warm reception accorded them, saying his organisation "aims to complement government's efforts" in education, health and the environment.

Although his organization is at its infancy stage, Mr Saidy said they had nonetheless continued to immensely contribute to the welfare of the Gambian populace by providing sponsorships to students from poor backgrounds.

Mr Saidy said that last year his organisation supported 12 pupils with school fees, second-hand clothes, stationery and toys. "This year, we are doing the same thing with another 13 pupils," he added.

He appealed to parents to encourage their kids to be serious with their education and to do well at school to attract more support from the sponsors.

Saidy thanked the Gambian government, the office of the governor and the local authorities for creating the enabling environment for his organisation to operate. He also promised the local communities of more help.

Sally Jatta, one of the parents of the sponsored pupils, thanked Harmony for the "timely gesture", saying they would live up to expectations. 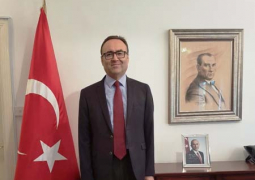