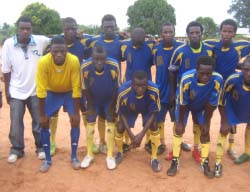 Ajax Football Club on Saturday celebrated an emphatic 4-2 penalty shootout win over Area Council to lift their 1st league title in the Badibou Kerewan football tournament in what appeared to be a pulsating final at the Kerewan football field in the North Bank Region.

An intense encounter that attracted a good number of spectators from Badibou Kerewan and its environs, the match witnessed some exciting moments of nawetaan football under the watchful eyes of a host of high-profile sports personalities.

Area Council, who were widely regarded as one of the most outstanding nawetaan teams in Kerewan following their four consecutive wins, including a 5-nil victory over Kerewan Central earlier in the competition, were widely tipped as the firm favourite to claim the accolade.

They began the game in a dramatic fashion and could have opened the scoring but all their brilliant attacking options and dominance in the early part of the game could not earn them the goals that could make them happy.

The two sides went into the encounter on the back of impressive scoring records but could not replicate their spectacular form having failed to capitalise on the numerous scoring opportunities they created.

Ajax were forced to reorganize themselves to put more pressure following a poor start to the game, which nearly give them the opener but Mawdo Faal's solo effort in the 19th minute was denied by a stand bar to the delight of coach Momodou Drammeh and his fans.

That threatening situation forced the coach to bring in fresh legs and it really paid off with some eye-catching performances from substitutes Abdoulie Drammeh and the skilful Sarjo Barrow who had quite a brilliant game in the night.

Ajax produced undeniably the best side with four established star players at their disposal including Africell Saint Matty's prolific centre forward Sainey Ceesay, but the stars could not help their team achieve the desired result in the regulation period resulting in a penalty shootout.

Ajax Captain Lamin Gassama, who played a pivotal role in his team?s success, received a trophy and a cash prize of D3,000 on behalf of his teammates, while Area Council, who were confirmed the runners up, walked away with a consolation price of D2,000.