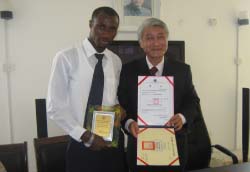 Gambian student Kebba S. Bojang was last Friday awarded by the Taiwanese ambassador to The Gambia, Richard Shih, for his outstanding performance while studying in Taiwan.

Mr Bojang was first awarded by the Kaohsiung Medical University for his outstanding performance at the university where he emerged as first runner up for the outstanding post-graduate student award for the academic years 2008-2010.

His excellent results made him the second best student and best foreign student in the university. Led only by a local student, Bojang emerged the most outstanding candidate among all the international students at the university.

In presenting the award to Mr Bojang at the Taiwanese embassy in Bakau, ambassador Shih congratulated the beneficiary for his achievement. He also congratulated students of the 2008 ICDF batch for successfully completing their studies in Taiwan. "I am glad that you came back to contribute to the development of your country," ambassador Shih said.

The ambassador revealed that "The Gambia has the highest number of foreign students" in Taiwan, adding that there are currently over 180 Gambians studying in different universities and colleges in Taiwan.

In receiving the award, Mr Bojang said the award would serve as an encouragement for Gambians studying in Taiwan as well as for those that will be going there to study in the future.

He thanked the Taiwan International Cooperation for Development Fund (Taiwan ICDF) for giving him and other Gambian students the opportunity to excel in Taiwan.

He also praised the Gambian government for maintaining bilateral relations with the Republic of China on Taiwan. "My special thanks go to my family and colleagues for their support throughout my educational career without which it would be difficult for me to achieve this," Bojang acknowledged.

The Gambian role model also applauded his school for giving him the "best and conducive" learning environment. "We learnt a lot in Taiwan thanks to their advanced technology," he said.

Baboucarr Barrow, an uncle to Bojang, said the family was grateful to the Taiwanese embassy for 'honouring' his nephew.

Baboucarr Ngum, public relations officer of RVTH, on behalf of the minister of health and chief medical director of the hospital, commended ambassador Shih and his team for facilitating numerous scholarships for Gambian students.

He called for the motivation of the graduates to enable them share their wealth of knowledge and experience with the hospital.

The ceremony, attended by other 2008 Taiwan ICDF scholarship awardees, gave an opportunity for ambassador Shih to learn from the students their individual experiences in different universities in Taiwan.

Kebba Bojang, who now works with RVTH as a medical doctor, is a native of Jambur village, Kombo South in Western Coast Region.

It would be recalled that Ms Kumba Conateh Nam was also last year honoured by the Taiwanese ambassador for her excellent performance during her studies in Taiwan.