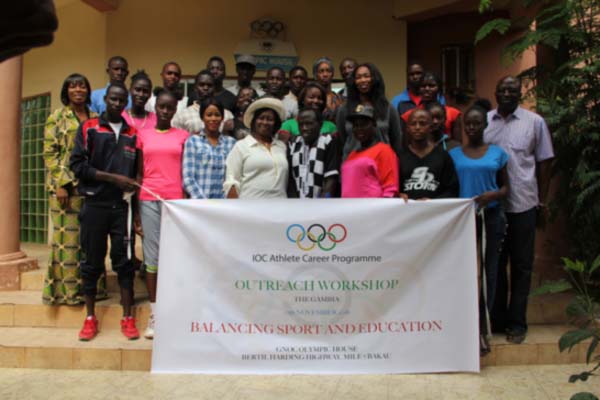 40 Athletes aged 16-20, drawn from National Sports Associations, took part in the maiden international Workshop for Athletes in The Gambia.

The aim of the day workshop was to help athletes prepare for their careers after retirement from elite sport.

She added that balancing sports and education is a condition for any athlete to be successful in life.

She spoke on the need for grassroots sports development which cannot be achieved without well trained coaches, a priority for the current GNOC Executive for the next four years leading to Tokyo 2020.

Ms Beatrice Allen, who is also the chairperson of ANOCA Women in Sports Commission, believes that IOC career outreach programme in The Gambia will surely change the landscape of athletes’ achievement, especially after their sporting career.

She added that the goals of the IOC/ACP outreach programme are to provide hands-on workshop to athletes with focus on three pillars, namely education, life skills and employment and assistance to athletes to achieve success both on and off the pitch by supporting them at different stages of their sports career from young to retiring stage.

Mrs Tounkara hailed the Gambia National Olympic Committee (GNOC) for coming up with such a workshop for Gambian athletes.

The GNOC is one of a number of governing bodies worldwide which has put schemes in place to assist its sportsmen and women to clear the void left by competitive action.