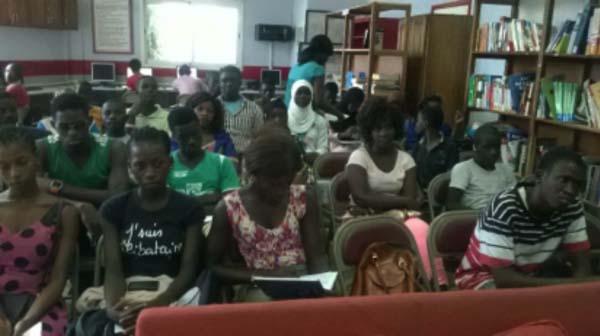 Youth Consortium for Progress (YCP), in collaboration with Fortress of Development for Africa (FDA) with support from Drug Law Enforcement Agency (DLEA), American Embassy through the American Corner, organised a joint celebration of World Drugs Day, International Youth Day and Humanitarian Day in form of a panel discussion on “illicit drugs and drug trafficking”.

The event, held at the American Corner, brought together school children, community development activists, youth groups/organizations, and intellectuals to discuss issues surrounding youth and illicit drugs in The Gambia towards the review of the YCP declaration on illicit drugs in line with the National Drugs Law.

In his opening remarks, Bubacarr A. Baldeh, president of the YCP, informed the gathering that YCP had been working together with institutions, organizations, groups and other stakeholders in sensitizing children, youth, and communities on the effects of illicit drugs in the society through workshops, symposia, radio talk shows, and annual International Drug Day celebrations to complement government’s effort at creating a drug-free environment.

Mr Baldeh said: “Drug abuse and the use of illicit drug destroys our society, hence the need for this panel discussion, to be able to see how to reduce the menace in the society.”

Baboucarr Kebbeh, vice chairman of Kanifing Municipal Youth Committee, also elaborated on the topic, saying that as “young people they should know what illicit drugs can do to their health”.

“It is good for the youth to know that if they are affected with illicit drugs, the nation will be affected,” he said, adding that he also said that the youth make up over 1.8 billion of the world population.

She added: “The use of illicit drugs affects the brain; it controls you and can lead to cancer, heart problem, and over dosing can even lead to death.”

The coordinator of FDA, Ahmed A. Salami, speaking with our reporter in an interview, said that despite the laudable efforts by DLEAG, its officials and the international community, “the world drug problem continues to constitute a serious threat to public health, the safety and well-being of humanity, in particular, young people, and the national security”.

An illicit drug problem undermines socio-economic and political stability and sustainable development of a nation, he added.

He also said the collaboration with YCP in organizing the event was good because FDA also aims is to empower and improve people’s lives and build participatory attitude to create sustainable development in society, hence the World Drugs Day theme: “Let’s develop our lives, our communities, and our identities without drugs”.

Maimuna Bah, chairperson of FDA, in her remarks, said that over the years YCP has taken it upon themselves to fight illicit drugs and its menace, as well as the threat it poses to the youth, the communities, the nation and the world at large.

She said their focus has ever been on the youth, who are the cream and most vulnerable set of people in the society, “because the effects drug abuse and the trafficking of illicit drugs have greatly affected the youth, and is hampering the development of many communities in the nation”.