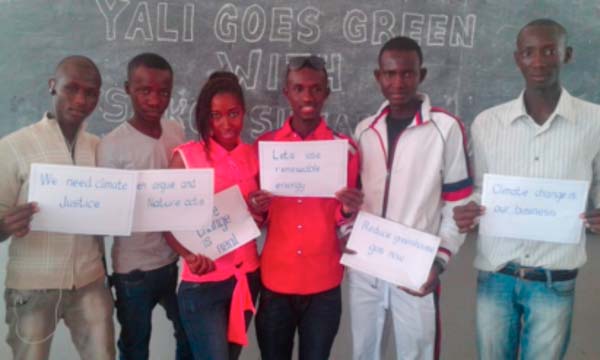 The occasion brought together teachers, youth leaders and students from senior schools.

The US President’s Young African Leaders Initiative (YALI) is a signature effort to invest in the next generation of African leaders.

President Obama launched YALI in 2010 to support young African leaders as they spur growth and prosperity, strengthen democratic governance, and enhance peace and security across Africa.

Speaking to the gathering on behalf of the administration of the host school, Latrikunda Sabiji Upper Basic School, Mr Jobe expressed delight about the programme.

He said as a Social and Environmental Studies teacher, he attaches great significance to the forum, adding that their students who are fortunate to attend the workshop would make best use of the knowledge gained.

He urged the organisers to reorganise a special programme for their students on the subject matter, so that hundreds of students, especially members of the school’s environmental club, would benefit enormously from the climate change knowledge shared.

He said the climate is evidently changing and, at the grassroots level, students should be aware of these adverse changes as they are the most vulnerable.

Mr Jobe thanked the YALI Network member, Saikou Suwareh Jabai, for choosing their school as the host for this significant event, which they would live to remember.

The guest speaker on the occasion, Sheick Omar Sillah, YALI alumni who attended the first YALI cohort in Ghana, spoke at length about the concept behind YALI and its desire to harness the minds of young people in Africa.

He said as young people, it was important for them to be empowered with facts of burning issues around them including climate change.

He thanked the US President, Barrack Obama, for initiating such a brilliant idea, noting that the US government is committed to addressing some climate change concerns in Africa.

Mr Sillah, who doubles as the Secretary General of The Legacy, said in mitigating climate change impacts in the continent, African governments should ensure good governance and redouble their collective efforts.

The pioneer of the event, Saikou Suwareh Jabai, a YALI Network member, who doubles as the Programme Manager of Climate Watch-The Gambia, said the programme was part of his activities to contribute to the YALI Goes Green initiative in The Gambia, as a network member.

“Having gone through an intensive course on climate change, where I was certified by the US Government,” Mr Jabai said, the event would avail him the unique opportunity to be awarded the ‘YALI Green Champion, award given to outstanding members of the network.

YALI recently launched #YALIGoesGreen, a network-wide initiative to spur climate change awareness and action, he said, adding that as a network member, he is tasked to show his support and spread the word about climate change.

While thanking the participants for responding to the invitation, Jabai, who facilitated the training activity, urged them to join the campaign and help increase the level of awareness.

He said climate change is a long-term shift in weather conditions identified by changes in temperature, precipitation, winds, and other indicators.

The change could be caused by human activities, such as the burning of fossil fuels. In addition to other environmental impacts, these activities change the land surface and emit various substances to the atmosphere.

He predicted that unless human beings significantly reduce carbon emissions, sea levels will rise, and weather patterns would shift violently.

Mr Jabia added that human-caused pollution had left our planet on the verge of a tipping point at which ecosystems would die and release massive amounts of cabondioxide.

If that happens, he went on, the changes to the climate could be irreversible, countless species would become extinct, and our economic and cultural way of life would be forever altered.

While expressing hope that the recently adopted Paris Agreement would serve as a building block in the global efforts to curb climate change, he enjoined the participants to share the knowledge gained as climate change is everybody’s business.

He said inspired by the YALI Goes Green initiative, they would launch an year-long climate change campaign project called “Make A Change” in February, when they would create a unified force that targets sensitising thousands of young people and farmers on the impacts of climate change, as well as increasing their understanding on some effective mitigation and adaptation measures.

He called on stakeholders to help and support the event as they planned to stage an evidence-based project.

Jabai, a climate change activist in The Gambia, finally enjoined Gambians to be passionate about climate change, and seek knowledge and awareness on the subject matter as this would help to increase our actions in curbing the impacts.