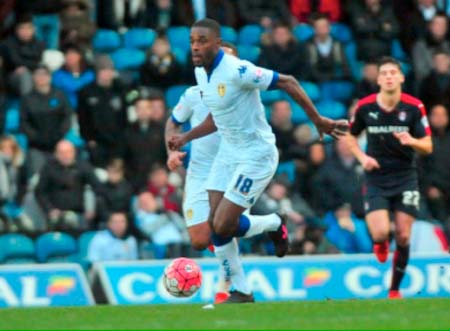 Gambia international Mustapha Carayol marked his Leeds debut with a spectacular right-footed screamer in a 2-0 win against Rotherham in Saturday’s FA Cup third round.

Carayol, who only joined the club on Friday morning in a loan deal from Middlesbrough for the remainder of the season, went straight into Steve Evans’ starting line-up for the Third Round tie at Elland Road and soon rewarded his new head coach with a ferocious opener.

Mustapha, whose only cap for the Gambia was in a friendly against Uganda’s Cranes in July, broke the deadlock on the stroke of half-time, hammering the ball beyond Rotherham’s keeper Lee Camp from the edge of the area after being tied up by Charlie Taylor down the left.

The Scorpions midfielder has spoken of his delight at making a dream start to life at Elland Road. “As soon as Charlie cut it back I knew I was going to hit it.”

“I played against Rotherham two weeks ago and scored from 30 yards, so I kept saying to myself during the game ‘If I get a chance to hit the ball, I’m going to hit it’. I’m happy that it has flown in again.

“I’m pleased that I’ve been able to please some of the fans. I was taking a bit of a battering on Twitter because I’ve come from Middlesbrough and stuff like that.

“But that’s part of football and hopefully I can show them what I can do and chip in with a few more goals between now and the end of the season.

“I’m going to keep working hard and hopefully you will see the performances on the pitch.

Carayol was pleased to be reunited with manager Steve Evans whom he worked with at Crawley as an 18-year-old.

“The gaffer just said to me ‘go out there and be positive’. I’ve played for him before and he knows what type of player I am.”

Asked about kicking on during the second half of the season on the back of an eight-game unbeaten run, Carayol added: “It was a really tough game on Saturday. We had to dig in and the result was the most important thing.

“Every game from now until the end of the season is going to be tough. We have to be positive and try to win every game to have a chance of making the top six.

“I’m looking forward to it. I’ll be really glad if we can come away from Ipswich with another positive result.”