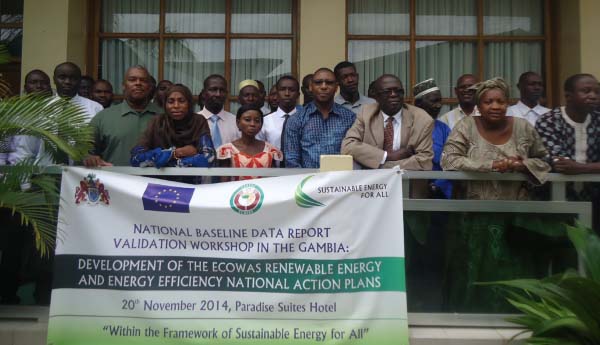 The Ministry of Energy, in collaboration with the ECOWAS Centre for Renewable Energy Efficiency (ECREEE), Thursday convened the National Baseline Data Report Validation Workshop at the Paradise Suites Hotel.

Held within the context of the development of the ECOWAS Renewable Energy and Energy Efficiency National Action Plans, it was organised “within the framework of sustainable energy for all.”

This exercise was part of the overall process for the development of NREAP and NEEAP for The Gambia, and takes place against the backdrop of efforts to encourage advancement in energy access, renewable energy and energy efficiency in the ECOWAS region.

In his remarks, Kemo K. Ceesay, Director of Energy, said the workshop aimed at presenting and officially validating the baseline report comprising the data collected for the development of the NREAP and NEEAP with the national stakeholders, and gathering feedback from the stakeholders on possible measures, actions and programmes to be integrated in the plans.

He said in July 2013, the ECOWAS leaders renewed their commitment to the provision of access to sustainable energy services in West Africa by adopting the ECOWAS Energy Efficiency Policy (EEEP) and the ECOWAS Renewable Energy Policy (EREP).

The EEEP and EREP policies foresee that all 15 ECOWAS member states will develop National Renewable Energy Action Plans (NREAP) and National Energy Efficiency Action Plans (NEEEAP) by the end of 2014.

“The purpose of the ECOWAS regional renewable energy policy (EREP) is to ensure increased use of renewable energy sources such as solar, wind, small-scale hydro and bio energy for grid electricity supply and for the provision of access to energy services in rural areas,” Mr Ceesay noted.

The overall target of the regional efficiency policy is to double, by 2020, the annual improvement in energy efficiency, to attain levels comparable to those of world leaders, he added.

This means that each year the amount of energy needed to produce a certain quantity of goods and services will decrease by about four per cent, he stated.

The specific target of the regional policy is to implement financial support instruments (feed in tariffs, among others), Mr Ceesay said.

According to Mr Ceesay, the status of the project and actions carried out by Sambou Kinteh, consultant to the Ministry of Energy and ECREE, was expected to give a general overview of the primary energy supply for 2010 and the most recent year, consumption of fuels for domestic applications for 2010.

Opening the ceremony, the permanent secretary at the Ministry of Energy, Momodou O. Njie, said the availability of a reliable system of energy supply that is efficient, affordability, and environmentally-sound is one of the vital components of the Gambia government’s development agenda, which focuses on poverty alleviation and the achievement of Millennium Development Goals, MDGs.

He said without widespread access to modern energy services it would be difficult to make necessary value addition to primary production and modernizing our economy.

With continuing fluctuation in global prices causing serious disruption in the energy supply system of the country, the Gambia government had to rethink its energy strategy to look inwards to utilise indigenous energy resources, Mr Njie said.

This led the government to embark on a programme to promote renewable energy and energy efficiency and conservation as other means to tackle the challenges confronting the energy sector.

The decision of the ECOWAS leaders to adopt the regional policies on renewable energy and energy efficiency, with specific targets to be achieved by 2030, is in line with the Gambia government’s energy policies and priorities, which are geared towards achieving universal energy access and sustainable energy for all, he added.