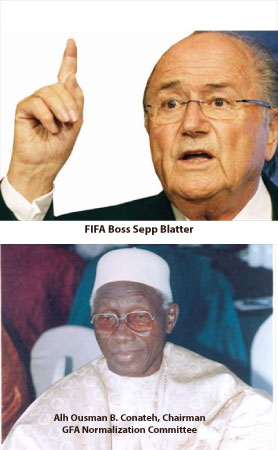 World football’s governing body Fifa has given a new lease of life to The Gambia’s Normalization Committee, and tasked them to complete the process of adopting the new statutes and holding of elections, among other things.

The letter conveying this to NC chairman O. B Conateh reads:

“The Fifa executive committee was briefed on the last achievements of the Normalization Committee and, more specifically, the finalisation of the GFA statutes which are ready now to be adopted. It acknowledged that the process took more time than foreseen due to the deep structural changes involved in the new statutes. Under these circumstances and taking into account the challenges still lying ahead, the Fifa executive committee decided to extend the mandate of the Normalisation Committee until 31 March 2013. It is expected that by then, the Normalization Committee will have completed the process of the adoption of the new statutes and the holding of elections accordingly’’.

The decision taken at Fifa’s executive meeting of September 28, came right at the end of the initial six months, on Sunday, and almost certainly cleared doubts and uncertainties surrounding the fate of the NC, which spent most of its old mandate fending off criticisms and allegations from the regional clubs and football officials opposed to reforms to the membership of the GFA.

Predictably, the Fifa announcement has been greeted with mix reactions. While the regional delegates renewed attacks on the record of the NC, calling them failures and accusing them of working on domestic and international football political agendas, others welcomed the new lease of life, and described it as the best deal to get Gambia from this imbrogolio.

’’The football family should come together now and adopt this constitution, and avoid further delay to the process. The document is good, and not only does it guarantee 21 votes for the regions alone out of 53, but also provides to them the platform to wield powers in their regions on behalf the FA. The fears are more imagined than real. No one can get elected into any future FA of The Gambia without the backing of the regional delegates. Besides, the constitution has been recommended by Fifa so as to bridge the gap of dominance by one side over the other in Gambian football politics. I think we should all tackle this constitution now and for all, and get over the business of shaping the future of the football. It is absurd for intelligent people to waste valuable time on matters that are as simple as this constitutional draft,’’ an imminent sports observer noted.

Another who also begged for anonymity said the regional delegates have given life back to the NC on a silver platter because Fifa thought that their constant complaints and bickering required a longer period to solve, hence the six months’ extension.

Meanwhile credible sources have confirmed to this reporter that the GFA has forwarded the Fifa extension letter to the Ministry of Sports for their perusal and recommendations on the way forward.

Another source hinted that the NC might not serve out the entire six months if the most difficult curve, the constitutional matters, are quickly resolved.