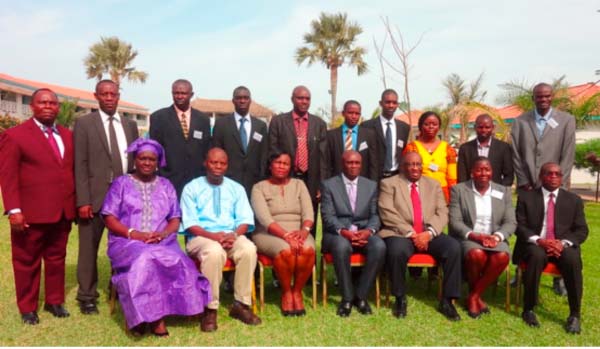 West African Institute for Financial and Economic Management (WAIFEM) has continued its efforts at honing the skills of public finance and economic planners in the sub-region.

The Institute, together with the Central Bank of The Gambia, yesterday commenced a ten-day workshop at the Jerma Beach Hotel in Senegambia, which includes staff of member central banks, ministries of finance and economic planning and other public sector bodies.

The theme of the workshop is focused on techniques of economic analysis, monetary policy and fiscal management.

In declaring the training course open, the 1st Deputy Governor of the Central Bank of The Gambia, Basirou Njie, said the workshop was aimed at deepening participants’ understanding of the techniques of macro-economic analysis, monetary policy and fiscal management.

According to Mr Njie, monetary policy is the process by which the monetary authority of a country controls the supply of money with the key aim of keeping inflation low and non-volatile.

“Central Banks are not, of course, indifferent to economic growth and unemployment, but believe that the best contribution they can make to long-term economic growth is to aim for price stability.”

He added that studies covering a number of countries suggest that over a ten-year period, high inflation – particularly of more than 10 – 20 per cent a year – is associated with lower and not higher economic growth.

He also said that in a market-oriented economy, central banks could not control inflation directly.

“Rather, instruments such as short-term interest rates, open market operations, foreign exchange intervention and use of standing facilities such as discount windows are used to influence the level of money supply.

“Also, fiscal management has ramifications on overall macroeconomic management. An important economic role of government is to produce certain goods that would not be supplied efficiently if production was determined by the market mechanism.”

He also spoke on a stabilization policy, which involves government spending on goods and services, on the one hand, and the consequences of government borrowing and how it is financed, on the other.

In his remarks on the occasion, the Director General of WAIFEM, Prof Akpan H. Ekpon, said the year 2016 marked 20 years of existence of WAIFEM since its inception in 1996.

According to him, WAIFEM was established in July 1996 by the central banks of The Gambia, Ghana, Liberia, Nigeria and Sierra Leone with the mandate to build sustainable capacity for improved macroeconomic and financial sector management in the member countries’ central banks.

He said the mission of the institute is to develop on a sustainable basis, expertise in the fields of macroeconomic, debt and finance sector management among the staff of member central banks, ministries of finance and economic planning and other public sector bodies with core economic management responsibilities.

Prof. Ekpon also revealed that WAIFEM would commence a fee-paying E-learning programme in diploma and advance diploma in public debt management and the French language.

He expressed appreciation with the government and people of The Gambia for hosting the training course.

He also thanked the governor of the Central Bank of The Gambia and his management for “the excellent logistic support” provided for the smooth organisation of the course.