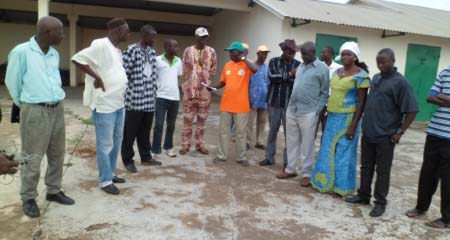 The West Africa Agricultural Productivity Program (WAAPP) project steering committee last Friday embarked on a two-day nationwide tour to meet farmers and discussed with them the progress made on the WAAPP intervention.

It was also meant to have firsthand information on the constraints and challenges faced during the implementation stages and the impact of the project to the livelihood of the farmers.

The visit availed the team the opportunity to see and chart a way forward in addressing issues raised by farmers in improving their agricultural productivity through the innovation platform approaches.

The tour also enabled the project steering committee to have firsthand information regarding the budget they have been approving for WAAPP, whether the money is reaching the right beneficiaries or whether there is any impact made so far as well as made suggestions and recommendations for the coming year.

According to the acting-project coordinator of WAAPP, Yassin Khan-Jallow, the project steering committee is responsible for meeting at least quarterly or more frequently depending on the exigency of the work on the importance of issues to be discussed.

She went on to say the project steering committee is responsible for reviewing and approving the annual work plan and budget submitted by the project coordinating unit, addressing policy issues and constraints as those relate to project progress.

The committee, she said, also addressed inter-agency issues and constraints of project implementation, and reviewing the quarterly project progress and annual reports including monitoring and evaluation reports from project coordinating unit to ensure work plans and procurement schedules are achieved as planned.

She commended the farmers for their commitment and hard work, particularly farmers who are actively involved in the innovation platforms.

She noted that the project steering committee is there to meet the farmers and listen to them as well as take their concerns and see possible ways of addressing them in time.

Noting that the concern raised by the poultry production manager are well noted and the project will take it up through the approval of the project steering committee to do something out of it to support the young man who have big aim in improving his productivity.

She also further commended the innovation platform for rice production in Boiram, noting that their concern regarding threshers, drying floor fertilizers and seed which could also be looked at by the project steering committee.

For his part, Mr Ousman Yabo, executive director of TANGO, who is also a member of the WAAPP project steering committee, expressed his impression with what he saw on the ground.

He noted that the tour is an eye opener and is a very important tour in the sense that the project steering committee has learned a lot from the farmers regarding the progress made, achievement, and challenges being faced.

Mr Yabo commended the farmers for their hard work in ensuring that rice production is being realized, particularly in Boiram.

The director of research at National Agricultural Research Institute, Mr Lamin Jobe, hailed the farmers for their efforts in boosting rice production through the innovation platforms.

“Looking at the rice field at Boiram, which is a clear indication that some farmers will score more than five tons of upland rice per hectare is a big achievement for the development of agriculture.”